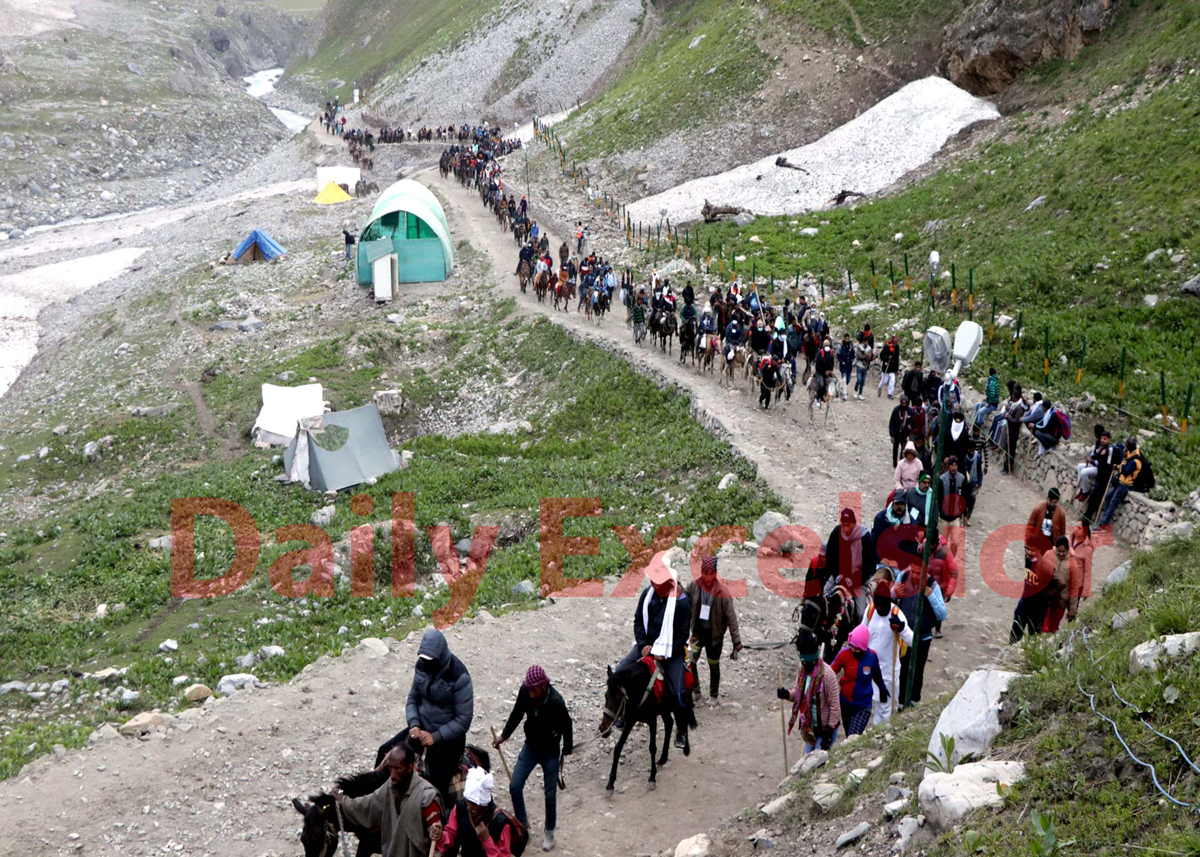 Excelsior Correspondent
JAMMU, July 8: After remaining suspended for the day from here due to strike in Kashmir valley, the holy Amarnathji yatra will resume tomorrow morning towards the twin base camps of Nunwan-Pahalgam in South Kashmir district of Anantnag and Baltal-Sonamarg in Central Kashmir district of Ganderbal.
According to officials, thousands of yatris are camping in Jammu and the number could be over 8,000 as no yatri vehicle was allowed to move from here towards Kashmir valley today due to the bandh call given by the separatists in Valley.
Meanwhile, the yatra which started on July 1, crossed one lakh in last eight days, officials said, adding on the eighth day of darshan today, 15,735 pilgrims paid obeisance at holy cave situated at 3880 meters above sea level in deep Himalayas in Anantnag district of South Kashmir. With this a total number of 1,11,655 pilgrims drawn from different parts of country have performed darshan in holy cave during last eight days, officials added.
They said weather enroute to holy cave from both the tracks remained pleasant during entire day and the yatra was proceeding smoothly from the twin tracks. There is total festivity on both the tracks as well as base camps, officials added.
As yatra remained suspended from Jammu today, about 4000 pilgrims were camping in Bhagwati Nagar Yatri Niwas and its outskirts while equal number of pilgrims were putting up in various parts of city including Vaishanvi, Saraswati Dham, Geeta Bhawan, Ram Mandir and other lodgements, officials said.
The officials said that the yatra will resume early tomorrow morning as usual for the twin base camps.
They said the unabated rush of pilgrims is continuing and thousands of yatris are reaching Jammu daily from other parts of the country. Even heavy rush of pilgrims is being seen outside the registration counters here with hundreds of pilgrims waiting in queues for their turn of registration.
Reports aid 3000 pilgrims from different parts of country crossed Lakhanpur, the gate way of J&K towards Jammu during last 24 hours in 157 vehicles. In addition to it, thousands of pilgrims have reached via Railway services, reports added.
The district administration of Kathua and Samba gives security escort to the yatris in their jurisdiction to ensure the safety and security of pilgrims.
The 46 day -long yatra to holy cave which started on July 1 will culminate on August 15 coinciding with Hindu festivals of Raksha Bandhan and Shravan Purnima. The Government has made elaborate arrangements for the pilgrims this year including the multi tier security cover from Lakhanpur to holy cave.