E-Paper
Home IPL 2019 Would love to have big crowds cheering for us, says Devine 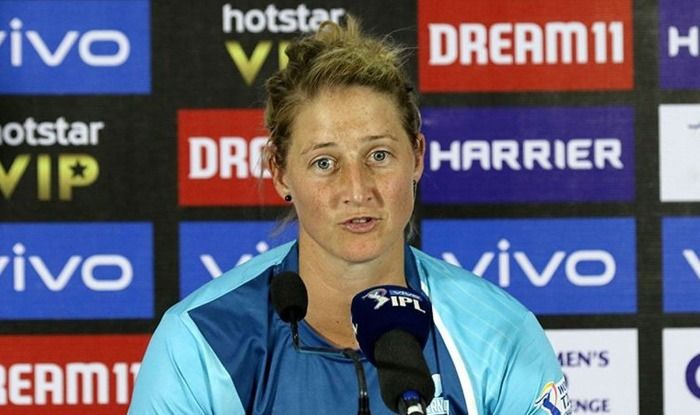 JAIPUR: New Zealander all-rounder Sophie Devine expressed disappointment at the scarce turn out for the opening game of the Women’s T20 Challenge here but was hopeful of a full house in the future.

The second edition of the women’s tournament kick started in stunning fashion with some fierce hitting by two teams captains Smriti Mandhana and Harmanpreet Kaur. In the end, Mandhana-led Trailblazers pulled-off a thrilling two-run win against Supernovas. However, like the last time, the stadium was far from full despite free entry.

“It is really unfortunate that in women’s games we don’t have big crowds but hopefully after tonight’s match the people would come to the stadium and would watch us play,” Sophie said at the post match conference.

“We would love to have big crowds but we know we need to put good performances. The match tonight was fantastic and next two games and the finals would get good crowd,” Sophie, who scored 32 off 22 balls for the Supernovas, said.

The tournament which has three teams playing each other in the round robin format gives the opportunity to 27 domestic players to showcase their talent and the New Zealander was impressed by the standard of the domestic players.

“I and all the overseas players have been really impressed with the standard of the domestic players. The catching may not have been that good but the fielding in Indian cricket has come along leaps and bounds and in last couple of series they have played they have been fantastic in the field,” Sophie said.

Talking about the game, the all-rounder said the track was a bit tricky and commended Supernovas’ skipper Harmanpreet’s performance.

“It is really disappointing, we were so close. We needed 30 off last three overs on a pitch that was a little bit tricky and it was probably asking for too much.

“But Harmanpreet, you know can do those sort of things and she took us very close to a great win. We have to work on a few things as a team. We have a few days off.”

Harmanpreet was unhappy with her batters who failed to capitalise on good starts.

“I knew if I was going to play till the end, I had the confidence to win but Sophie bowled the 19th over well and that changed it for us,” Harmanpreet said.

“I think we bowled well in the first 10 overs, but we didn’t execute our plans in the last 10. When the ball comes on to the bat, it is hard to get the set batsmen out. I think we threw wickets away when we were set and that was the major problem today. Overall, I am really happy both the teams played well tonight,” she added.

Meanwhile, young Harleen Deol, who was the second highest scorer for the Trailblazers with 36 runs, was happy to share the dressing room with experienced overseas players.

“BCCI is taking an initiative so we all are responsible for that. Even today there was a decent crowd. The progress is always slow. Women’s cricket has grown after the World Cup. The empty stands are a challenge for us but we will catch up,” Harleen added. (AGENCIES)