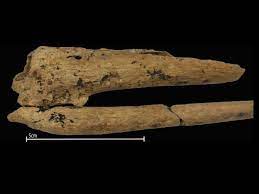 BRISBANE, Sept 8: Modern medicine seems to advance with time thanks to research breakthroughs.
Hence it’s often thought that further into the past, only simpler medical practices existed.
The medical expertise of foraging communities such as hunter-gatherers has been thought to be rudimentary and unchanging.
It’s been argued that shifts towards settled agricultural life within the past 10,000 years were what created new health problems and advances in medical culture; this includes surgery.
Published today in the journal Nature, we report a discovery shattering this longstanding trope of popular imagination – the skeleton of a young adult from Borneo whose lower left leg was amputated in childhood by a prehistoric surgeon 31,000 years ago.
This finding pre-dates the previous oldest known evidence for amputation surgery by a staggering 24,000 years.
It suggests that human medical knowledge and surgical procedures were far more advanced in the distant past of our species than previously thought.
The Borneo discovery
In 2018, some of the earliest known rock art was found in caves of East Kalimantan, Borneo, dating to 40,000 years ago.
The following year, archaeologists from Griffith University, University of Western Australia, and Indonesian institutions of archaeology and conservation (Arkeologi, Bahasa dan Sastra, Pusat Riset Arkeometri BRIN / Balai Pelestarian Cagar Budaya Kalimantan Timur) searched remote caves in dense rainforest for archaeological finds that could shed light on the lifeways of these early artists.
Led by local Dayak colleagues, the team travelled to a remote camp via a multi-day canoe and hiking journey. It was accessible only by boat at certain times of the year.
During these field trips, in early 2020 the team conducted archaeological excavation within Liang Tebo cave. There, they uncovered a complete human burial, with grave goods of brightly coloured red ochre pigments and stone burial markers.
Upon closer analysis of the leg bones of the remains, an unexpected discovery emerged.

Evidence for amputation at 31,000 years
Multiple dating techniques (radiocarbon, uranium-series, and electron-spin-resonance) confirmed the burial had taken place 31,000 years ago, making it Southeast Asia’s oldest known grave.
Skeletal analyses confirmed the lower left limb had been surgically amputated; the way the bone tissue had changed over time (known as “bone remodelling”) matched clinical cases of successful amputation that hadn’t become infected.
The healed bone confirms an injury that wasn’t fatal to the patient, implying the surgeon or surgeons likely understood the need to manage and treat it.
They were able to prevent infection after the invasive surgery, allowing the person to survive into adulthood.

Medical developments in tropical rainforests
In the tropical rainforests of Borneo, hot and humid conditions create the perfect breeding ground for various microbes, and therefore increase the chances of getting a wound infected.
But the rainforests also have astonishingly rich plant species diversity. This vast “natural pharmacy” may have prompted early flourishing in the use of botanical resources.
The surgeons treating the amputation patient could have drawn upon locally available botanical resources before, during, and after the procedure. Such medicinal plants could have provided anaesthetics and antimicrobial remedies preventing infection.
Surviving a childhood amputation and living into adulthood among rainforest caves of Borneo also suggests a high degree of community care.
A community that painted complex figurative art had also seemingly mastered the complexities of surgical amputation 31,000 years ago.
Sea levels being much lower at this time, Borneo was still connected to Asia.
This means the survivor of this surgery also lived close to the potential departing shorelines of ice-age Asia, from where the world’s first mariners departed earlier still, eventually reaching what is now Australia.
This new finding adds to a growing body of evidence that the first modern human groups to reach our part of the world tens of thousands of years ago had medical knowledge and skills beyond what was previously thought. (The Conversation)
(AGENCIES)