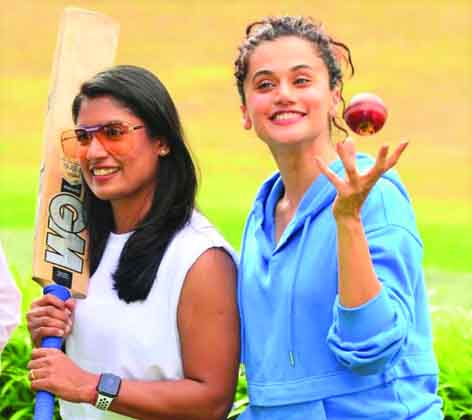 Taapsee Pannu, who has increasingly become Bollywood’s go-to actor for sports films, visited the iconic Eden Gardens in Kolkata Saturday to promote Shabaash Mithu, a biopic on former Indian women’s cricket captain Mithali Raj. Seated beside Raj and director Srijit Mukherji, Pannu speaks to Souvik Ghosh on her decision not to sign any more sports films, her upcoming film Dunki co-starring Shah Rukh Khan and more…
Q. In multiple interviews you have said that you are done with sports films. But the characters are great in their own merit. Did you go through any kind of dilemma while choosing Shabaash Mithu?
A. I had no dilemma. I said yes without thinking about how hard it will be. Had I thought, I would have probably given it a second thought about it. But yes, I don’t want to do it anymore, at least for a few years because it’s becoming both physically and mentally exhausting for me. I am almost forgetting whether I am an actor or an athlete. I am leading two lives.
For these films, I wake up at 5-6 in the morning, go for training for a particular sport and then I shoot for another film for 12 hours. So I don’t get any rest as I have to do both, training and acting. So it’s becoming mentally exhausting for me now. I have been doing non-stop training and shooting everyday for almost two years. Now I want to just shoot (laughs).
Before Shabaash Mithu, Pannu featured in sports films Soorma, Saand Ki Aankh, Rashmi Rocket
Q. So was Mithali Raj the reason to say ‘yes’ to the script?
A. There will not be another Mithali Raj in cricket. Likewise, there will not be another film that will take us through the journey of women’s cricket for 23 years when Mithali Raj played. We have shown 20 years of her journey in the film though. So we will not have a second quick two-and-a-half-hour recap to catch up with women’s cricket. I am not sure whether the life of anyone else will be better to get the recap of women’s cricket.
The icing on the cake is the kind of records that she holds internationally. I am privileged, proud and lucky to be doing this character which will go down in history when people will see it decades later.
Q. Is it true you had stopped watching cricket at one point?
A. I think a lot of people will resonate with the feeling I went through. I was in the early years of my school when the match-fixing scandal broke out. It was very heartbreaking for a cricket lover, that too a kid, like me. I literally used to pray when India played. I was that crazy about the sport until the scandal broke out. So me as a small girl felt very heartbroken and that’s because I loved the sport so much.
Pannu got a big break in 2016 when she starred alongside Amitabh Bachchan in Pink. She went on to feature in Judwaa 2, Manmarziyaan, Badla, Mulk, Thappad et al
Q. It is also fascinating that being an actor you can play roles of various personalities.
A. I never got any opportunity to get trained in life. All my learning came during my school days. I used to enroll myself in all sports which were available in the school and learn. So as an actor, I get a chance to use my medium to again become a sportswoman. I think the biggest beauty that attracts me to my job is that an actor can live a lot of lives in one lifetime. So I would have played one sport being an athlete but now I get to play a number of sports being an actor (laughs).
Q. You are going to star alongside Shah Rukh Khan in Dunki and you have shared your excitement in a tweet. Do you think this big-ticket film is the result of the path you tread in the last 10 years?
A. I think it is the result of some right decisions I have made in my life. That’s what it is. (TWF)