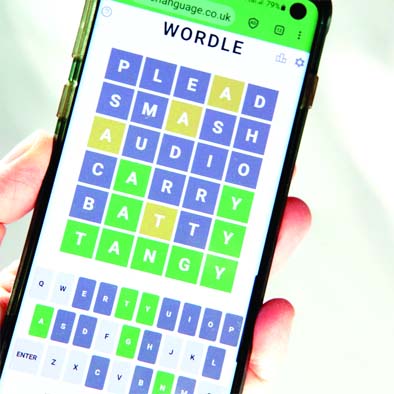 Kalyani Shankar
The Covid pandemic has posed a challenge to many people feeling isolated. We are amid the third wave Omricron. People look to new games during the pandemic. For the past two years, I too got clued into New York Times crossword puzzle, mini crossword, Sudoku, letterboxed, etc. All these are brain games and keep your mind sharp when the movement is restricted.
Recently, the internet world has gone viral with the word game “Wordle”, and it is catching up like wildfire with senior citizens and the younger lot. The simple game is just one word, six tries, six squares, once a day. And if you haven’t heard of Wordle yet, you will soon.
So popular did the game grow that the New York Times bought it last week for an ‘ unspecified sum in lower seven figures’. The acquisition will help the Newspaper broaden its digital content as it has set a goal of 10 million subscribers by 2025. According to the paper, while 90 people played the game on November 1, on January 2, 2022, over 3 lakh people played it.”
Wordle is a remarkable story of the pandemic. That is also a love story because the founder of the game Josh Wardle, an engineer in Brooklyn, created it for his partner Palak Shah (There comes the Indian connection). “The goal was to make a game that my partner would enjoy playing,” he revealed in an interview recently. He then shared it with his family and extended family. Soon it got the attention of the netizens, and today it is a craze. “The game has gotten bigger than I ever imagined (which I suppose isn’t that much of a feat given I made the game for an audience of one).
The once-a-day online game gives a player six chances to figure out the day’s five-letter word. You have six tries to guess that day’s “Wordle.” If you think it rightly, the letter turns green. If the letter is correct but in the wrong place, it turns yellow, and it remains black when it is wrong. The difficulty lies in that no clues are given, but you shoot in the dark. The game is available in several languages, including French, Italian, Spanish, Portuguese, Swedish, German, and Norwegian. A Tamil version of the Wordle also has come out, but the Tamil script is syllabic.
It was my daughter who got me interested in the game last month. Now it has become a family game. Every morning we send cryptic messages to each other about how we fared. Not since Scrabble has a word game become so popular. It is a single-player puzzle that combines elements of several games, including the good old Scrabble and Battleship. It is free, and one can play from any smartphone, desktop computer or tablet.
Wordle has a lot of political patrons now. Pakistan President Arif Alvi was playing wordle amidst the crisis in Balochistan recently. His tweet came when the Pakistan Army faced the Balochistan Liberation Army (BLA). Pakistan public criticized him for it.
In India, Congress leader Rahul Gandhi led the game and shared a manufactured screenshot with words like “JUMLA”, “TAXES”, “HUMDO”, “JHOLA”, “SNOOP” and “PHOTO”. Accompanying the tweet, he wrote the caption: “Guess who?” Another caption “, Wordle 056 6/6” – is a reference to Prime Minister Narendra Modi’s “56-inch chest” image. Former Minister Shashi Tharoor is another politician who plays the game regularly. There are many others.
The game’s social aspect allows you to share your score, making it a great way to start conversations and connect. India has seen a 48 percent growth in the daily twitter conversation of Wordle.
The game has become popular because people believe that playing mind games is necessary to keep the mind sharp. There are other games like crossword, which is very popular. On the eve of the first world war, Arthur Wynne, a New York Times editor, found the game for the paper’s fun section. The Newspaper has also come out with a new game called Letterboxed, where you spell words by connecting letters in the box. It was introduced in 2019 and is very popular among mind game players.
Then there is SUDOKU which dates back to the 18th century. According to ECONOMIST, a Swiss mathematician found the game “Latin squares”. A freelance puzzler Howard Games from Indiana invented the modern SUDOKU. Going back to reading the classics and playing mind games will not only keep your mind healthy and also probably be a preventive cure for depression and other such problems one facing the pandemic. The doctors say ‘we have to live with Covid’ games like wordle and other word games keep your mind sharp and occupied.