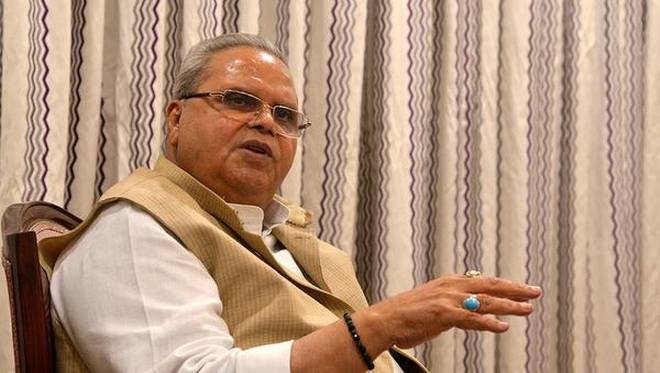 SRINAGAR: Issuing a stern warning to Pakistan against ‘aiding and facilitating militants’, J&K Governor Satya Pal Malik on Monday said India won’t hesitate in entering the neighbouring country and destroying terror camps if does not behave.
The Governor’s warning to Pakistan comes a day after Army Chief General Bipin Rawat, claimed that six to ten Pakistani soldiers were killed and three terror camps destroyed in Pakistan-occupied-Kashmir (PoK) opposite the Tangdhar and Keran sectors in north Kashmir in retaliatory action by the Indian forces.
An Army official said that the retaliatory action came in response to ceasefire violation by Pakistani troops that left two Indian Army soldiers and a civilian dead and three other persons injured in Tangdhar sector in north Kashmir district of Kupwara.
“War is not an answer, but if Pakistan didn’t behave, what happened yesterday will be repeated. India won’t hesitate in entering (Pakistan) and destroying the terror camps (in PoK),” Mr Malik on Monday said on the sideline of a police function at Zewan in the city outskirts.
“If we didn’t act, they (Pakistan) will continue with what they have been doing all this while. They might even go further,” he said.
Meanwhile, in a message to the people of the valley, Mr Malik said from November 1, there will be a new Kashmir. “So come and join us to take the state forward,” he said.
“I want to ask these boys who are roaming around? what have you achieved,” he asked.
Mr Malik also lauded the role of Jammu and Kashmir Police in maintain peace post scrapping of Article 370 and Article 35 A on August 5, when several preventive measures, including gag of internet, mobile phones and landlines, besides suspension of railway service were taken.
Some of these measures – like the gag of internet service on pre-paid mobile phone services – still remain in place in the politically sensitive Kashmir valley, where shutdown against the scrapping of the special status of the state entered 12th week on Monday.
Over a thousand politicians, including three chief ministers Farooq Abdullah, Omar Abdullah and Mehbooba Mufti political workers, activities, businessmen were also places under detention as a precautionary measure.
(agencies)