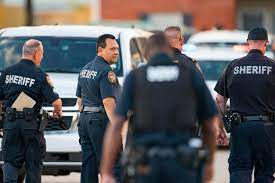 Houston, Oct 27: A woman and her boyfriend were arrested Tuesday in the death of the woman’s child, whose skeletal remains were found inside a Houston-area apartment with three surviving but apparently abandoned siblings, officials said.
Bryan W Coulter, the 32-year-old boyfriend of the dead child’s mother, was charged Tuesday with murder. The mother, Gloria Y Williams, 36, was charged with felony injury to a child by omission, failure to provide medical care and failure to provide adequate supervision, Harris County Sheriff Ed Gonzalez tweeted Tuesday night.
Both were booked into the Harris County Jail without bond pending appearances before a magistrate. It was not immediately clear if the two had attorneys. Gonzalez said more charges are possible.
The Harris County Institute of Forensic Sciences in Houston, which conducts all autopsies in the county, listed the primary cause of death as “homicidal violence with multiple blunt force injuries.”
Michele Arnold, a spokeswoman for the institute, said her agency could not provide additional details.
Deputy Thomas Gilliland, a spokesman for the Harris County Sheriff’s Office, also said he could not immediately provide any more information because his agency was still investigating the death.
One of the surviving siblings, a 15-year-old, called the sheriff’s department Sunday and told authorities his 9-year-old brother had been dead for a year and the body was inside the apartment, according to the law enforcement agency.
Deputies found the teen and two other siblings, ages 10 and 7, living alone in the apartment, Gonzalez said. The 15-year-old told authorities his parents had not lived in the apartment for several months.
Gonzalez said it appeared that the surviving children were “fending for each other,” with the oldest sibling caring for the younger two.
Their apartment didn’t have any power, and a neighbour had helped the children by charging a cellphone for them and buying them food, Gilliland said.
The younger children appeared to be malnourished and had physical injuries, according to the sheriff’s office. All three siblings were taken to a hospital and assessed and treated.
The children last attended school in May 2020, said Craig Eichhorn, a spokesman for the Alief school district. They didn’t return for the 2020-2021 school year, and school officials attempted an unsuccessful home visit in September 2020, Eichhorn said.
A judge on Monday granted the Texas Department of Family and Protective Services temporary custody of the three children.
Investigators were still trying to determine why no one with the apartment complex had noticed anything unusual, Gilliland said.
Highmark Residential, the property management company which runs the apartment complex, did not immediately return a call seeking comment on Tuesday. (AGENCIES)