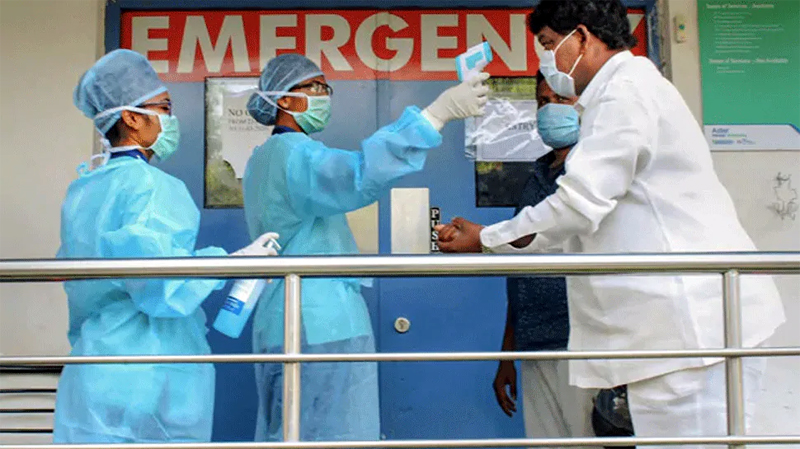 Excelsior Correspondent
JAMMU, Oct 24: Three persons including a woman today died of COVID-19 in Jammu region, two of them in Jammu district and one in Doda, while 213 persons tested positive, 116 of them in Jammu district and 344 persons recovered from the virus.
A 40-year-old man from Chatha Satwari in Jammu district who was suffering from Neurodegenerative disorder and was positive for Coronavirus died in the Government Medical College Jammu today, six days after being admitted in the hospital while 82-year-old man from Paloura Jammu died in the same hospital because of hypertension and pathogen.
A 70-year-old woman from Majmi Dessa in Doda district, who was co-morbid and positive for the virus, died in the GMC Jammu after remaining in the hospital for 17 days.
With three Corona casualties today, number of deaths in Jammu region has gone up to 475. Maximum 248 casualties have been reported in Jammu district, 45 in Rajouri, 44 Doda, 30 Kathua, 28 Udhampur, 25 Samba, 22 Poonch, 14 Kishtwar, 12 Ramban and seven in Reasi district.
Eleven persons today tested positive for Coronavirus in Jammu district during Rapid Antigen Testing (RAT).
Thirteen persons were today subjected to COVID testing at Raj Bhawan Jammu and all of them reported negative for the virus.
Among 213 positives in Jammu region, 116 were reported from Jammu district, 114 of whom were locals and two travelers.
The Block Medical Officer (BMO) Kandi in Rajouri district tested positive today. A total of seven persons reported positive in Rajouri.
Thirty three positive cases were reported from Doda, 13 Kishtwar, seven each Samba and Ramban and five Reasi and all of them were locals.
Seven of eight COVID positive cases in Udhampur, four of eight in Kathua and seven out of nine in Poonch district were locals and rest travelers.
Out of 344 persons who recovered from the virus today, 117 belonged to Jammu district followed by 52 in Poonch, 42 Ramban, 41 Reasi, 33 Kishtwar, 23 Udhampur, 21 Rajouri, 10 Doda and five in Kathua district. Samba didn’t report any recoveries today.
Jammu region now has 36495 Corona cases. Of them, 2447 are active positive and 33573 have recovered from the virus. There have been 475 casualties in the region.