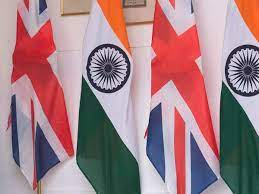 LONDON, Dec 22: A comprehensive strategic partnership backed up by an ambitious Roadmap 2030 for closer cooperation over the next 10 years were the highlights for India-UK relations this year, which closes with the promise of free trade agreement (FTA) talks scheduled to kick-start in January 2022.
The comprehensive aspect of the partnership was on display at the COP26 climate conference in Glasgow hosted by Britain, where Prime Ministers Narendra Modi and Boris Johnson enhanced their International Solar Alliance (ISA) collaboration with the launch of a pioneering Green Grids Initiative.
However, the year started with pandemic-induced travel disruption as Johnson cancelled his India visit – where he was to be the Chief Guest at the Republic Day celebrations.
There were further cancelled travel plans as the Delta variant took hold around the world and took the proposed Johnson-Modi meeting virtual in May, when they launched the Enhanced Trade Partnership (ETP).
It set the clock ticking on a full-fledged FTA as part of Roadmap 2030, with the intention to at least double bilateral trade from the current GBP 24 billion a year in 10 years’ time.
“India is, of course, one of our most significant export markets, and I look forward to launching our trade talks soon with them,” UK International Trade Secretary Anne Marie-Trevelyan said recently, as the minister set to lead the FTA charge.
The Department for International Trade (DIT) has confirmed that talks are set to kick-start early in 2022, with plans for early harvest agreements also in play.
“We look forward to launching negotiations early next year. India is projected to become the world’s third largest economy by 2050, and a trade deal will open huge opportunities for UK businesses to trade with India’s GBP 2 trillion economy,” a UK government spokesperson said.
The India-UK FTA marks a significant goal for the Johnson-led British government, which assumed power in December 2019 with a very defined mission to “get Brexit done” and then open up Global Britain for trade with allies in the strategically important Indo-Pacific region.
The UK used its presidency of the Group of Seven (G7) countries – Canada, France, Germany, Italy, Japan, US and UK as well as the European Union (EU) – to send out a clear message by inviting India to the Leaders’ Summit held in Cornwall in June.
Once again COVID played havoc with travel plans, this time for Modi’s proposed G7 visit to the UK – which was to materialise only later in the year for COP26, when India set out an ambitious renewable energy agenda.
At the G7, Foreign Secretary S. Jaishankar stepped in to attend the Foreign Ministers’ segment of the multilateral forum and also used his UK visit to formalise an “unprecedented” India-UK Migration and Mobility Partnership with UK Home Secretary Priti Patel.
The bespoke plan, which envisages around 3,000 young students and professionals a year access new work experience benefits in either country, is expected to be up and running by April 2022.
It marked another post-Brexit pledge – to open up Britain to talent with a fairer visa and migration regime – with extradition also within the ambit.
Patel reiterated her goal to facilitate the return of economic offenders wanted in India, even as businessman Vijay Mallya’s case continues to remain shrouded in an asylum application protocol secrecy and diamond merchant Nirav Modi’s High Court appeal expected to conclude in the New Year.
This sits alongside Patel’s another flagship mission, to have the Graduate Route visas allowing post-study work up and running for international students. The scheme has already resulted in a staggering jump in Indian student visa grants, a figure expected to keep its upward trend in 2022.
While Brexit had technically been done last year, it was only in January this year that the Brexit transition period came to an official end – paving the way for the UK to start delivering on its Global Britain agenda.
However, the pressure on the UK prime minister remains at its peak, with the birth of a daughter overshadowed by a major rebellion with nearly 100 of his parliamentarians voting against the government’s COVID restrictions in Parliament. This was also a protest vote against reports of lockdown-breaching parties within Downing Street from last year.
The high drama in the corridors of political power went hand in hand with some royal drama as Prince Harry and wife Meghan Markle gave an explosive television interview with American talk show host Oprah Winfrey, implying racism within the ranks of Britain’s royals.
It came in a year of great mourning for Queen Elizabeth II as she lost her husband of 73 years, Prince Philip – the Duke of Edinburgh, who passed away peacefully at his residence in Windsor Castle on April 9.
The Queen has since maintained a pretty busy schedule but was forced to rest on the advice of her medics after spending a night in hospital back in October. The 95-year-old monarch is all set for a bumper year in 2022 – which marks the Platinum Jubilee of her 70-year reign with a series of celebrations and special events.
The year 2021 is bowing out on a disturbingly similar note of uncertainty as 2020, with the new Omicron variant of COVID-19 taking the UK’s daily infection rates to their highest levels since the very start of the pandemic. The focus remains on a boosted booster vaccine campaign for all adults before the New Year. (PTI)