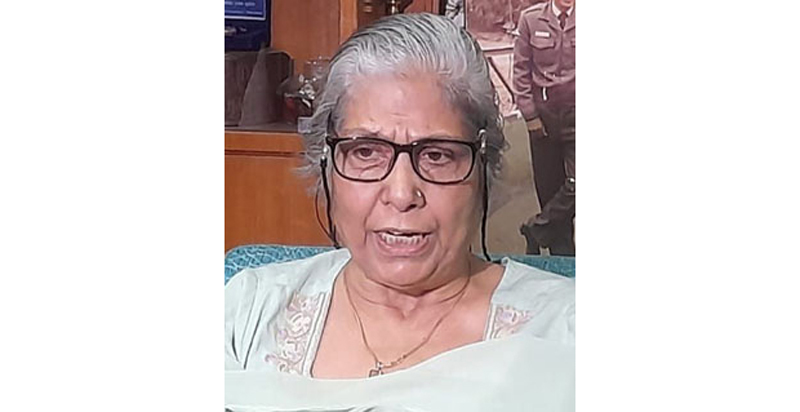 ‘Hurt that he lived for over 32 years’

JAMMU, May 25: Nirmal Khanna, wife of Squadron Leader Ravi Khanna who was killed by Yasin Malik and gang, said today she honoured the sentence given to Malik, adding that she was certain to get justice one day, as the court pronounced life imprisonment to Malik along with other sentences and monetary fines.
Khanna, who had earlier sought a death sentence for Malik, said, “The judges made a decision based on their judgment, I honour it. They know better than me what punishment should be given in this case.”
“I am 100 percent sure justice will be given to me. People say justice delayed, is justice denied. I don’t believe in it,” she said.
Earlier, as the sentence was awaited, Khanna had said she is hurt that he lived for over 32 years after killing her husband.
“I am hurt by the fact that he remained alive for 32 years, four months after killing my husband, simple,” Khanna said.
Commenting on Malik’s statement that he is a Gandhian, she said, “It is shameful, Mahatma Gandhi said ‘Ahimsa Parmo Dharma’, he did not pick the stick to hit others, he used it for walking… All these things mean nothing, he can call himself Gandhi, or Buddha.”
Asked about former Jammu and Kashmir Chief Minister Mehbooba Mufti’s comment that the sentence will not solve Kashmir issues, she said, “Mehbooba Mufti is a politician, she has been the Chief Minister. If we see her political track record, we will get to know why she is saying this”.
She also called former Prime Minister Manmohan Singh as an inspiration, adding that as the PM he should not have met Malik.
She also said that the judgment given will be a message to future generations on what the punishment for sedition should be.
JKLF chief Yasin Malik, one of the first terrorists to start the militancy in Jammu and Kashmir, was today sentenced to two life imprisonments and other sentences.
Malik, who is known to have killed four IAF personnel in a terror attack in January 1990, was convicted on May 19 after he pleaded guilty to all the charges in connection to a 2017 case related to terrorism and secessionist activities.
Earlier during the proceedings today, the NIA sought death penalty for Malik.