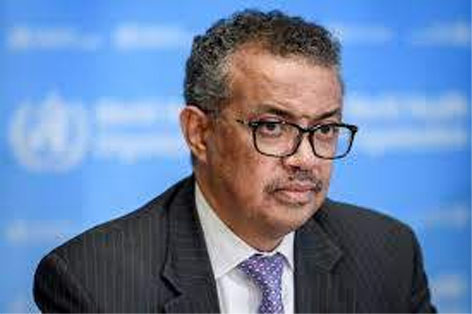 Moscow, Sep 21: WHO Director-General Tedros Adhanom Ghebreyesus has saluted the way Italy handled its coronavirus outbreak, emphasizing, in particular, the role of the country’s health care system and workers.

Tedros spoke via video link at the Italian-hosted Courtyard of Assisi event, dedicated this year to the way forward from COVID-19.

“Italy is a shining example that with national unity, solidarity, humility & community engagement, even the most severe situation can be turned around. Its health system is truly universal & free, & this has clearly contributed to its successful fight against #COVID19,” Tedros said on Twitter following the event.

The WHO chief said he had offered his “profound condolences to #Italy as a nation & to each family that has lost a loved one due to #COVID19; & my deep respect for every nurse, doctor, paramedic, ambulance driver, hospital cleaner & everyone who put themselves at risk to serve others.”

“The forces of nationalism & isolationism threaten to tear us apart. My hope is that this defining crisis of our time will teach us all that the only way to prevail is together!” Tedros said.

During the initial wave of the coronavirus at the beginning of this year, Italy emerged as Europe’s worst outbreak, with its northern regions hit particularly hard. It was the first European country to lock down completely as a nation in early March.

The country has managed to curb the spread of the virus and now stands as the fifth largest outbreak in Europe after the United Kingdom, France, Spain and Russia by the number of cases and the second after the UK by the number of deaths. As of Monday, Italian health authorities have confirmed 298,156 coronavirus cases, including 35,707 deaths and 218,351 recoveries.