E-Paper
Home Latest News WHO ‘very much’ sided with China on coronavirus: Trump 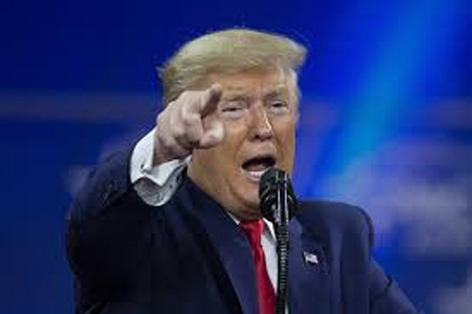 WASHINGTON: US President Donald Trump has said the WHO  has “very much sided” with China on the coronavirus crisis, asserting that many are unhappy with the “very unfair” praise by the global health agency on Beijing’s handling of the COVID-19 outbreak in the country.

President Trump was responding to a question on allegations by Republican Senator Marco Rubio that the World Health Organization (WHO) showed “favouritism” to China where the disease originated.

Congressman Michael McCaul, ranking member on the House Foreign Relations Committee, has questioned the integrity of the WHO’s Director-General Tedros Adhanom Ghebreyesus, saying “that there were several red flags in his past with respect to his relationship with China.”

“It (WHO) has been very very much sided with China. A lot of people are not happy about it,” Trump told reporters at a White House news conference on Wednesday.

Trump was asked if he agreed that the WHO showed favouritism and the US should re-explore its relationship with the Geneva-based UN health agency once the dust settles.

In a tweet Congressman Greg Steube alleged that the WHO has been a mouthpiece for China during the coronavirus pandemic.

Both the WHO and China must face consequences once this pandemic is under control, he demanded.

“There need to be consequences here. WHO has sided with China Communist Party against the world in this pandemic,” he said in another tweet.

WHO Director-General Ghebreyesus has faced criticism for praising China’s leadership for its “determination to end the new coronavirus outbreak”.

He has also been accused of conspiring with Beijing in its “propaganda” to hush-up coronavirus cases.

Ghebreyesus had gone to China in January to meet President Xi Jinping, and a WHO team comprising of international health experts working in the country.

“Today I met with Xi Jinping, President of China, in Beijing to discuss next steps in battle against the new coronavirus outbreak. WHO appreciates the seriousness with which China is taking this outbreak & the transparency authorities have demonstrated,” he had said in a tweet after his meeting with Xi.

“Just back from China where I held frank talks with President Xi Jinping, who has taken charge of a monumental national response to the coronavirus outbreak. Based on cooperation & solidarity, China has committed to protecting its citizens & all people globally from the outbreak,” he said in another tweet.

Globally, the death toll from the coronavirus has risen to 21,293 with more than 471,518 cases reported in over 170 countries and territories, according to data from Johns Hopkins University.

Although the epicentres Hubei province and its capital Wuhan have been reporting zero cases for a while, death toll there continued to rise.

On Wednesday, six deaths were reported from Hubei province taking the death toll in China to 3,287 people and total number of cases to 81,285.

In Hubei and Wuhan alone as of Wednesday 3,169 people died since January. The virus was first reported in Wuhan in December last year.