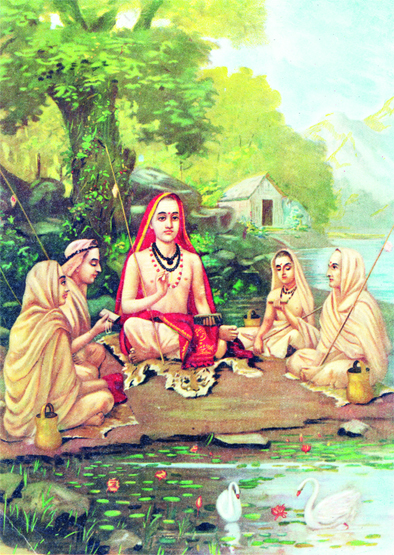 B L Razdan
Often we hear the delighting phrase: “From Kashmir to Kanyakumari” as an assertion of India’s unity and integrity. But, sadly, not many of us know that it was a lad from South India, who unified India after re-establishing the faith of Sanatan Dharma which is holding its sway through its length and breadth even today.
Shivagiri and Aryadevi of Kaladi in Kerala were issueless even several years after their marriage. They repaired a nearby Shiva temple and worshipped there with all their heart. Shiva appeared in a dream to Shivguru and and asked him if he wanted a good son with a short life span or a simpleton with a long life. Shivguru opted for the former and thus was born to the couple a child around 788 AD. It was a precocious child. Shivguru died when the child was just three years old. At age 5, the child was sent to gurukul and in three years the boy mastered all the subjects in the then prevalent curriculum and returned home, where he served his widowed mother with devotion and spent his time in further study, teaching and scriptural discourses with the learned pundits.