E-Paper
Home Todays story We will fight, go to court on Art 370: Farooq 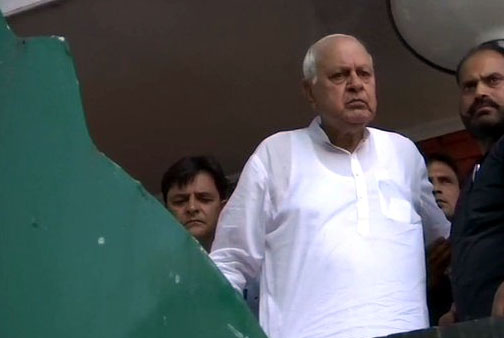 Contests HM’s statement that he was free

SRINAGAR/NEW DELHI, Aug 6:
Comparing the revocation of Article 370 by the Centre as “body being carved”, National Conference chief Farooq Abdullah today said they will fight and go to court against the Modi Government’s decision.
In his first remarks since the Union Government on Monday revoked provisions of Article 370 to take away state’s special status, and proposed its bifurcation into the Union Territories of Jammu and Kashmir, and Ladakh, Abdullah said a “dictatorial” authority has been invoked and not a “democratic” one.
Talking to TV channels in Srinagar, Abdullah said, “as soon as the gates will open, our people will be out, we will fight, we’ll go to the court. We’re not gun-runners, grenade-throwers, stone-throwers, we believe in peaceful resolution of things.”
“They want to murder us, we are ready, my chest is ready, fire here, not into my back,” 81-year-old Abdullah said in an emotional outburst.
He also contested Home Minister Amit Shah’s assertion in Parliament that he was neither under detention nor arrest and was at his home out of his own will.
The former Jammu and Kashmir Chief Minister said there was a big padlock on his door and he had to “force himself” to come out and speak to the media.
“I heard the statement of the Union Home Minister of India that Farooq Abdullah is free and is staying in the house out of his own will. I thought how can he be lying when a DySP has been placed outside my house and no one can come in and no one can go out,” he said.
“I feel sorry that the Home Minister of India can lie like this,” he added.
Getting teary-eyed while talking to reporters, Abdullah said after “dividing the regions, are they going to divide people’s hearts also. Are they going to put Muslims one side, Hindus one side, Buddhists one side? Is that what they want? Is this what India is. My India is for all, everyone who believes in a secular nation, who believes in unity.”
He also said, “how do you think you would feel when your body is being carved. The body that stood together in all odds, fought every evil unitedly. Today how do you think people feel who have stood by this nation as to how we have been betrayed.”
The Articles 370 and 35A were guaranteed by the Government of India, he asserted.
“Dictatorial authority has been invoked and not a democratic authority that we thought they will invoke. I don’t know how many have been arrested. Nobody is allowed to come in or go out, we are under house arrest,” he said.
Abdullah said he knows only of his son Omar Abdullah and another former CM Mehbooba Mufti’s arrest that too through the media.
“There is no written order but we have been placed under house arrest. We believe in law, we are not stone pelters or killers. We have never used the path of gun. We have always used Mahatma Gandhi’s way…Why was this done? What was the need,” he said.
“If it (the developments in J&K) is going according to the Constitution why the Home Minister could not wait when the matter is with the Supreme Court of India. Article 370 is not a Presidential order, it is a Constitutional guarantee,” Abdullah said. (PTI)