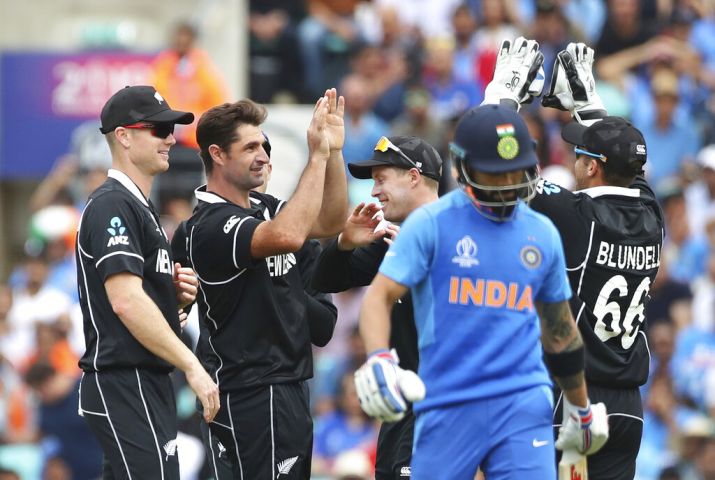 LONDON: Trent Boult grabbed four wickets with some incisive swing bowling as India were shot out for 179 inside 40 overs against New Zealand in the first of their two warm-up games of the ICC World Cup here Saturday.

Boult grabbed four for 26 in 6.2 overs as Ravindra Jadeja’s half-century ensured a 175-plus score for the ‘Men In Blue’ after being reduced to 115 for 8 at one stage.

Jadeja’s 62-run ninth-wicket stand with Kuldeep Yadav (19) was the only saving grace for India in an otherwise disappointing batting performance.

It was Boult’s first spell where he removed openers Rohit Sharma (2) and Shikhar Dhawan along with No 4 KL Rahul (6) that proved to be decisive in overcast conditions.

The lack of footwork was evident as Boult trapped Rohit with a delivery that darted in while Dhawan had an inside edge to a delivery that had a shade more bounce. Rahul was played on when Boult got one to rear up.

Skipper Virat Kohli (18 off 24 balls) found his defence breached by Colin de Grandhomme’s off-cutter trying to play across the line.

Dhoni’s (17 off 42 balls) painful stay at the crease was cut short by Tim Southee when he was caught at short mid-wicket trying to give the bowler charge. (AGENCIES)