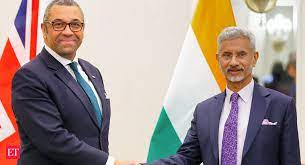 NEW YORK, Sept 22: Prime Minister Narendra Modi has set a very ambitious desire to get the India-UK Free Trade Agreement signed by Diwali and his new British counterpart Liz Truss wants her administration to “match the pace and ambition” of the Indian leader, UK Foreign Secretary James Cleverly has said.
Cleverly also said that the bilateral relationship between India and UK is longstanding and wide-ranging, which is both a “huge plus” but it also means that “quite understandably there is a desire to have a very, very wide-ranging, meaningful free trade agreement.”
“Obviously, Prime Minister Modi has set a very ambitious desire to get a free trade agreement signed by Diwali. Now that means that both us and Indian negotiators are going to have to work very, very hard but we are very willing to do so,” Cleverly told PTI in an interview here Wednesday on the margins of the high-level UN General Assembly session.
“We want to make sure that the deal that we do, ideally by Diwali, is the first step in a continually evolving trade and economic relationship with India. So, there’s a lot to do and not a lot of time,” Cleverly said, adding that he is keen to “match the ambition of the Prime Minister.
“He (Modi) is a very high-energy political leader. He’s very, very ambitious. He’s ambitious for India as a country, he is ambitious for our relationship with India and all this is incredibly positive. Our Prime Minister (Truss), I know because we’ve had this discussion, she wants us to match the pace and ambition of your Prime Minister. And that means the other ministers and the officials are going to have to work really hard and really fast.”
Diwali falls on October 24 this year.
Cleverly said “we need to continue discussing things like climate change, the impact on food security and of course, our joint efforts to bring resolution to the various conflicts around the world, including, of course, the Russian invasion of Ukraine. So a very, very broad and busy agenda,” he said.
He added that that range of potential agreements also adds complexity. While there are traditional areas in a free trade agreement such as exports and imports of manufactured goods, agricultural goods, technology and service industries, the mutual recognition of professional qualifications is also “incredibly important now.”
“It is a challenge in a positive way because we have such a strong heritage and inter-woven economies and societies,” he said.
Jaishankar, speaking at an event at Columbia University, said India has done a trade agreement with Australia and UAE recently. “We are in the middle, fairly advanced in negotiations with the UK. We have recommenced with the EU, quite hopeful out there and there will be a few others which will happen.”
Commerce and industry minister Piyush Goyal said last month that negotiations for the proposed free trade agreement between India and the UK are progressing at a faster pace. The agreement is aimed at boosting bilateral trade and investments between the two countries. India has signed a trade pact with the UAE in a “record” time and “now our talks with the UK are moving at a faster pace”, Goyal had said.
In January, India and the UK formally launched talks for a free trade agreement. They have set the deadline for concluding talks by Diwali.
Cleverly met External Affairs Minister S Jaishankar late Wednesday evening on UNGA sidelines, the first opportunity for him to formally meet with his Indian counterpart after Jaishankar’s “very very kind message that he sent congratulating me” when he took on the post of Secretary of State for Foreign, Commonwealth and Development Affairs of the United Kingdom under the new administration of Prime Minister Truss, who took office early this month when Queen Elizabeth had formally asked her to form a new government.
Two days after Truss met her at the Balmoral Castle in Scotland, the 96-year-old British monarch passed away.
British High Commissioner to India Alex Ellis said in New Delhi that the best way to celebrate Diwali will be to have a good free trade agreement between India and the United Kingdom. He observed that the free trade agreement (FTA) will lead to the creation of more jobs, growth and opportunities for both India and the UK. Speaking on the sidelines of an event, he asserted that there was “high ambition” to complete the India-UK FTA by Diwali — a deadline set earlier by both nations — and added, “that would be an auspicious date”.
Asked if one could expect a ‘Diwali Dhamaka’ for India in relation to the FTA, the British High Commissioner quipped, “I hope so.”
Earlier addressing an Assocham conference, Ellis said: “We have the aim to finish the FTA by Diwali.”
India and the UK trade mostly in services which accounts for about 70 per cent of the overall trade. Both countries also aim to increase their bilateral trade to USD 100 billion by the end of this decade. (PTI)