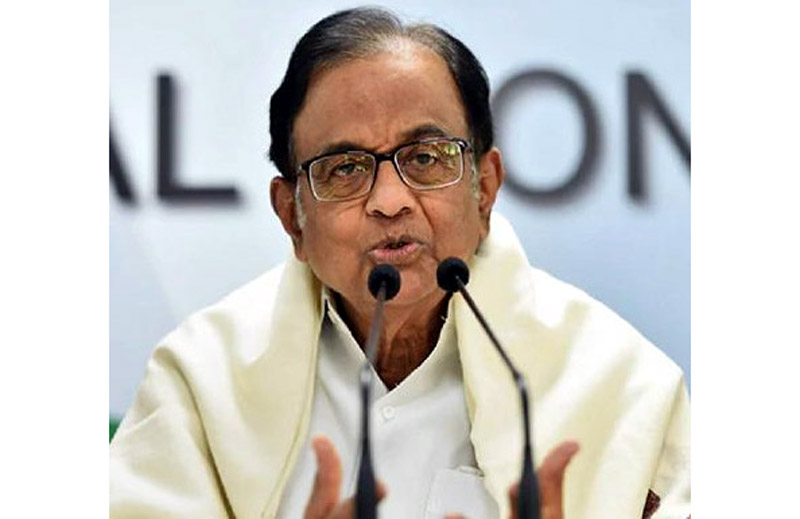 NEW DELHI, Aug 7: Senior Congress leader P Chidambaram on Sunday said he was veering to the conclusion that Parliament has become “dysfunctional” and alleged that democracy is “gasping for breath” in India with almost all institutions tamed, emasculated or captured.
He also said Rajya Sabha Chairman M Venkaiah Naidu “failed” to protect Leader of Opposition Mallikarjun Kharge last week from being summoned by the Enforcement Directorate (ED) when the House was in session.
In an interview with PTI, Chidambaram also dismissed Home Minister Amit Shah’s remarks linking the Congress’ demonstration against price rise on Friday to the Ram temple foundation day, saying the anniversary of the ‘Shilanyas’ was “far from our mind” when the date for the protest was fixed. It was fixed taking into account that all the MPs will be in Delhi on Friday because the voting for the vice presidential poll was on Saturday, he said, adding that one can always twist logic to blame someone.
“Moreover, it was on August 5, 2019 that the illegal dismembering of Jammu and Kashmir took place! Let’s leave these aside when discussing a serious issue,” Chidambaram said.
Shah had linked Congress leaders’ protest in black clothes over the issues of price rise, unemployment and GST hike to what he said was the party’s “appeasement” politics to convey its opposition to the Ram temple foundation stone laying by Prime Minister Narendra Modi on August 5 in 2020.
Chidambaram also rejected BJP leaders’ charge that the Congress’ protest on August 5 was an attempt to save the party’s top leadership that is facing questioning by the ED in the National Herald case.
“We had announced and made it clear that the protests on August 5 were exclusively on inflation, unemployment and Agnipath. If people pretend to be deaf and blind to the announcement, what can we do?” he said.
The leaders summoned in the National Herald case are strong enough to defend themselves and they also have the full support of the rank and file of the party, Chidambaram asserted.
Asked about Kharge’s summoning by the ED during the working hours of Parliament last Thursday, he said it was a “sad day” for Rajya Sabha when the Chairman “failed to protect” the Leader of the Opposition from being summoned when the House was in session.
“Contrast the support extended by the US government to Ms Nancy Pelosi, Speaker US House of Representatives, on her visit to Taiwan. The Executive branch respected the authority and autonomy of the Legislative branch. The US government sent its aircraft carrier to the seas off Taiwan and also kept air support ready,” he pointed out.
In our country, the Executive branch summoned the Leader of the Opposition when Rajya Sabha was in session and one of the two heads of the Legislative branch “pleaded helplessness”, he said, adding that it was a “sad day”. On ED probes against several Opposition leaders, Chidambaram refused to comment on any particular case but asserted that it was increasingly and abundantly clear that the powers of investigation and the laws were directed only at members of the Opposition. (PTI)
“Institutions have been tamed or emasculated or captured. Democracy is gasping for breath. We may have the shell of democracy, but inside, the shell has been hollowed out. This applies to almost all institutions, which is what Shri Rahul Gandhi alluded to in his reply (at the press conference Friday),” he said.
With Parliament unable to transact much business during the Monsoon session due to frequent adjournments amid Opposition protests over a host of issues including price rise, Chidambaram said he is “veering to the painful conclusion that Parliament has become dysfunctional”.
He asserted that the single big reason for this was that the treasury benches had “no interest” in dialogue, discussion and debate.
“Let me ask, what calamity would have befallen if the government had agreed to a debate under Rule 267 on price rise on the first day? The debate would have been concluded in one day. Instead, we wasted two weeks,” he said (PTI)