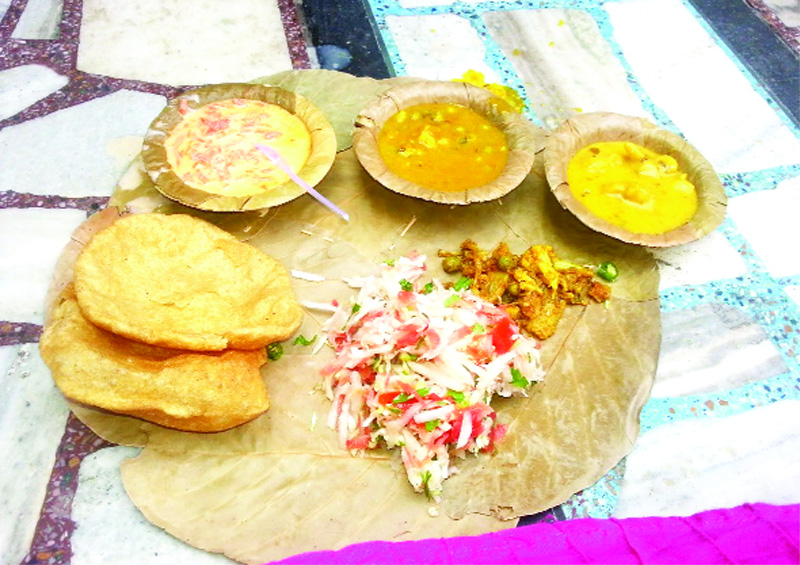 Ashok Sharma
Dogras are known for their rich culture  and heritage.Among the various aspects of Dogra culture is the celebration at the time of marriage and other occasions such as birth of a child.Dogras also observe various rituals for their deceased relatives such as half yeary, yearly and  4th death anniversary of their relatives who left for their heavenly abode.
They organise feasts on these occasions, especially when the deceased has breathed his last at a ripe age after discharging all his responsibilities and leaving behind him sons, daughters, grandchildren and even great grandchildren.As and when these feasts were organised, the guests and other people were served food on leaf plates and bowls called ‘Doona-Pattal’ which are made from tree leaves and are quite easy to dispose. They have been in use in the northern India since times immemorial. But with the passage of time, fast life and flow of money, these plates are no longer used except in rural areas for serving food on religious and social functions.One feels nostalgic to recall  the times when on arrival at the bride’s home,the Baratis were served sweets in Doonas at the house called ‘Lua wala ghar’.They were also used by the vendors to serve golgappes, samosas, pakoras etc.to their customers.Doonas were purchased by a thousand and pattals by hundreds.It used to be a practice to source camelfoot leaves from the forest and  dry them a little for keeping them in the sun for two three days.Leaves of sal, banyan and areca can also be used to make doona pattals.The leaves are arranged according to their shape and size and then bound  by using tiny wooden or grass sticks.This job, being easy and involving less energy,would be done by all,even by old and sick people of the family and it was a source of income to the rural people, especially women.In a cluster of two three villages, there used to be five -six families who would supply doona pattals to all the people to cater to the need on social functions such as marriages, mundans or religious functions such as bhandaras (community feasts).Then came the time when the practice of hosting functions in the banquet halls  became a fashion and food and other eatables began to be served in steel/other plates and the practice of savouring the food while standing came into vogue.
As time passed by,disposable paper/plastic/thermocol cups, plates and glasses also came into the market and they are now  extensively used in big and small parties, picnics, get togethers etc.All this  pushed ecofriendly  has leaf plates and cups into oblivion.But it must be remembered  that plastic is a pollutant which is non biodegradable and on being burnt, it produces poisonous gases.Taking hot food in the plastic cups/plates is reported to be harmful for health.Therefore, the use of plastic has been banned in many states of our country.Now the people are again switching over to leaf doona pattals to save the environment from degradation.Doona pattals of various sizes or  plate and cups in a single piece can now be manufactured with a machine which can be purchased with not much investment.It has become a flourishing business in many cities such as Bengluru and women groups in large number are starting these units in various parts of our country to improve their economic condition.Even the advanced countries such as Germany has started producing doona pattal in view of the fact that it is easy to dispose and it changes into manure on being decomposed.Moreover,no chemicals or additives are used in preparing doona pattal.So it is hundred percent environmentally friendly and safe for our health.After use,These can be fed to the animals and on being dried, they can be safely disposed by being  burnt without emitting toxic gases.Moreover, the leaves are totally ecofriendly as they are picked from the trees without causing any harm to the trees while in making paper plates, cups etc.many trees are required to be felled.Therefore, the need of the hour is to motivate and  train rural women in the art of making hard pressed leaf doona pattal with a machine to make them self reliant and economically independent.They can earn a lot of money by  doing this job in their leisure.People too should love  nature and learn to live in a cleaner, greener and ecofriendly world.They ought to say ‘good bye’ to the plastic plates and cups in view of plastic being hazardous to the environment and switch over to leaf  doona pattal to save our environment from pollution.