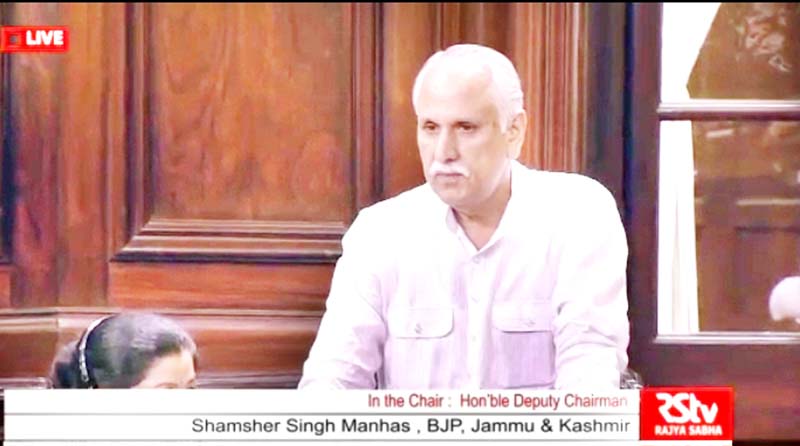 Excelsior Correspondent
JAMMU, Aug 5: Member Parliament Shamsher Singh Manhas today said that Government’s decision to scrap Article 370 and bifurcate the state of Jammu and Kashmir into two union territories, will boost socio-economic development of Jammu, Kashmir and Ladakh.
The Rajya Sabha MP from Jammu and Kashmir, while speaking in favour of the Jammu and Kashmir Reorganization Bill 2019 which ultimately will end the special status of the State and most of the provisions of temporary Article 370, said this is historical.
“He said Jammu Kashmir with Legislative Assembly and Ladakh as independently will now function as union territories. The idea of shaping two union territories is great and applaud able which in turn will give boost to socio-economic development of the Jammu Kashmir and Ladakh,” he added.
Manhas said that it’s a matter of proud for whole Country and especially for the people of Jammu and Kashmir that a long pending and most controversial Article’s incorporation in the Constitution of India has finally came to an end.
The RS MP from J&K said that this is a tribute to all the martyrs of Armed forces, party workers and nationalist voices who strongly stood amidst the atrocities of previous regimes. He said that few separatists and anti national political parties have been opposing the abrogation of Article 370 and 35 A for their own benefits and misdeeds, thus depriving the common man of his original rights. This Government and its principles believed in ‘one nation one Constitution theory’ and that is going to be realized now, he added.
“Due to this Article 370 unemployment had become an important issue in the State due to no or lesser industrialization and in near future we believe that this problem will came to an end,” Manhas further added.