E-Paper
Home International US ‘very saddened’ by what happened to the relationship with China: Trump 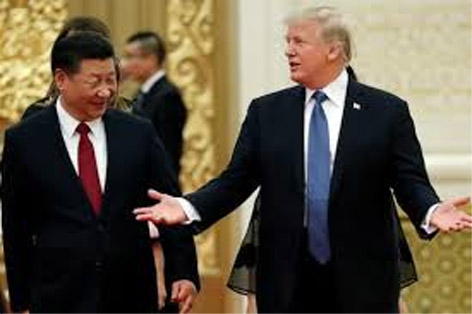 WASHINGTON, May 30: President Donald Trump has said the US is “very saddened” by what happened to its relationship with China, hours after he announced a series of decisions against it and blamed the Chinese government’s “malfeasance” for the death and devastation caused by the COVID-19 pandemic worldwide.
Amid escalating bilateral tensions over the coronavirus pandemic, trade issues and Beijing’s new controversial security law in Hong Kong, Trump announced a series of decisions including issuing a proclamation to deny the entry to certain Chinese nationals and tightening of regulations against Chinese investments in America.
Trump also terminated the US’ relationship with the World Health Organisation, accusing the UN’s health body of misguiding the world on the coronavirus and siding with China on this issue.
“We’re talking about doing a lot of things and we’re very, very saddened by what happened to our relationship with China. They should have never allowed this to happen. They could have stopped it at the source. We asked them to come in and help them, and they didn’t want help from anybody, even the World Health Organization,” he told reporters at the White House on Friday, referring to the spread of the virus that has killed over one lakh people in America alone.
Trump said that China contained the virus within its own territory but did not stop it from spreading around the world.
“We are certainly not happy with what happened with respect to China. They have a virus that started and when it got out of control, perhaps, I assume that’s what happened, it got out of control, whichever way and they stopped it from going to China, but they didn’t stop it from going to the rest of the world. So nobody likes that. That was not good,” Trump said.
“Countless lives have been taken and profound economic hardship has been inflicted all around the globe,” Trump said.
According to the Johns Hopkins University data, the deadly disease has infected nearly 6 million people and claimed over 364,000 lives worldwide.
The US is the worst-affected country in the world with over 1.7 million confirmed COVID-19 cases and more than 102,000 deaths.
“They did not do a good job. So, I don’t know if it was incompetence or it was done for some other reason, but I know that I didn’t see anything in Beijing and I didn’t see anything in other Chinese cities, but I did see them in New York and London, in Paris. We saw them in Spain and we saw them in Italy. We saw that the enemy, the invisible enemy come out,” he said.
Led by the US, several countries in the world have blamed China for the spread of coronavirus and its failure to provide timely information about the disease, leading to the death of over three lakh people and causing an unprecedented economic crisis.
Trump has been pressing China to agree for an inquiry into the origin of the virus, including the allegation that it emerged from a bio-lab in the central Chinese city of Wuhan.
“The world is now suffering as a result of the malfeasance of the Chinese government,” he said.
He added that China had “instigated a global pandemic that has cost over 100,000 American lives”.
The president accused China of pressurising the WHO to “mislead the world” about the virus.
However, China has rejected all US allegations of a cover up regarding the COVID-19 outbreak.
On asked if this was the start of the Cold War between the US and China, he said, “And all over the world, 186 countries, and probably more than that now. And they stopped it in China, but they didn’t stop it going to Europe and the United States and the rest of the world. So what’s that all about? And we have to do a very strong study and figure that out.”
“They wanted to go in, and they were delayed. But we asked to go in very specifically, and they didn’t want any help. They didn’t need any help, and then it got out of control in some form. But it didn’t seem to get out of control when it came to going to other parts of China because it didn’t go very far, but it did come to the United States. It did come to Europe. It went all over the world,” he said. (PTI)