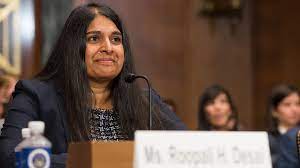 Washington, Aug 6:
The US Senate has confirmed Indian American litigator Roopali H Desai to the United States Court of Appeals for the Ninth Circuit, making her the first South Asian judge to serve on this powerful court.
Desai was confirmed by the Senate by a bipartisan vote of 67-29 on Thursday.
Headquartered in San Francisco, California, the Ninth Circuit is by far the largest of the thirteen courts of appeals, covering a total of 9 states and 2 territories and with 29 active judgeships.
“It comes as no surprise that Ms Desai’s nomination has received high praise across the political and ideological spectrum, as well as from state judges, law enforcement officials, and three different fire fighters’ organisations. With 16 years of experience as a litigator, she is an outstanding addition to the Ninth Circuit,” said Senate Majority Whip Dick Durbin, Chair of the Senate Judiciary Committee.
Ahead of the Senate vote, Senate Majority Leader Chuck Schumer said Desai’s resume leaves no doubt she merits confirmation: a graduate of Arizona School of Law, a clerk for Judge Mary Schroeder, the first woman to ever serve as a Ninth Circuit Chief Judge, she has excelled at every step of her legal career.
“She is one of Arizona’s top election lawyers, having played a crucial role in protecting her state’s elections in 2020, and has fought for everyone from children in foster care to children in public schools during the pandemic,” he said.
Desai is a partner at Coppersmith Brockelman where she has practiced since 2007. From 2006 to 2007, Desai was an associate at Lewis & Roca. She served as a law clerk for Chief Judge Mary Schroeder on the United States Court of Appeals for the Ninth Circuit from 2005 to 2006. Desai received her Juris Doctor degree in 2005 from the University of Arizona.
“Arizona is proud of Roopali Desai’s confirmation to be a US Judge for the Ninth Circuit Court of Appeals. Desai is known and respected for her integrity, fairness, and wealth of legal knowledge, and I’m delighted to secure the broad bipartisan votes for her confirmation. As a judge, Ms Desai will make Arizona and America proud,” said Arizona senior Senator Kyrsten Sinema.
Neil Makhija, Indian American Impact executive director, said Desai’s bold and inspired work as an attorney in Arizona earned her a reputation and career of which she should be immensely proud.
“A fierce defender of democracy, she valiantly represented the Arizona state secretary of state, Katie Hobbs, against a lawsuit by President Donald Trump’s campaign that sought to overturn Biden’s victory in Arizona,” he said.
“As the first South Asian confirmed to the 9th US Circuit Court of Appeals, her historic victory is a win for all of us. We at Impact extend a sincere and warm congratulations to Roopali for not only majorly advancing her illustrious career, but also our entire community,” Makhija said. (PTI)