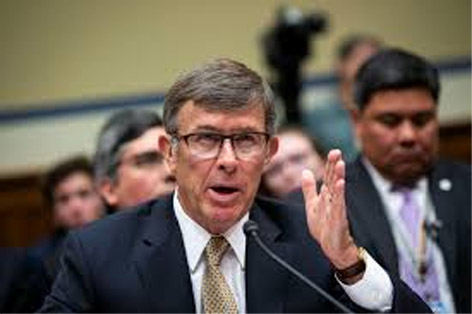 Washington, Feb 21: Donald Trump replaced his intelligence chief Thursday as reports emerged that the US president was furious with the official over a briefing given to lawmakers about Russian interference in the 2020 election campaign.
Trump erupted in anger at acting director of national intelligence (DNI) Joseph Maguire when he learned of the February 13 session with the House Intelligence Committee, US media reported.
It wasn’t immediately clear if Trump had objected to a specific element of the talk, in which Maguire aide Shelby Pierson reportedly told lawmakers Russia was once again meddling in the US election on Trump’s behalf.
But the president was annoyed by the presence of Adam Schiff, the Democratic head of the investigation that led to Trump being impeached for abuse of power and obstruction of Congress, according to The New York Times.
Maguire had been a favorite to be nominated for the permanent DNI post but Trump soured on the official, The Washington Post said, when he heard about the classified election security briefing.
The president berated Maguire in an Oval Office showdown last week for the “disloyalty” of his staff, the Post reported, effectively thwarting his chances of becoming a permanent hire.
There was “a dressing down” that was the “catalyst” for Maguire’s sidelining, the Post quoted one unnamed source as saying.
Trump was impeached in December over accusations that he coerced ally Ukraine into helping him cheat in the 2020 election, withholding military aid considered vital to the former Soviet republic in its war with Russia.
Since he was acquitted by the Republican-led Senate, an emboldened Trump has been purging the Justice Department, National Security Council and Pentagon of staff he considers disloyal.
Casualties have included NSC staffer Lieutenant Colonel Alex Vindman and EU ambassador Gordon Sondland — both key witnesses in the impeachment inquiry — Vindman’s twin brother, an NSC lawyer who wasn’t involved, and Pentagon policy chief John Rood.
Trump announced on Wednesday he was replacing Maguire with Richard Grenell, the ambassador to Germany with a blunt approach that irritated the close ally.
Democrats have voiced outrage over the placement of Grenell, who takes charge after a period of tension between intelligence professionals and Trump, who has played down Russian interference in the last election.
Grenell, 53, who has no relevant background or top-level management experience, will supervise 17 agencies including the CIA.
“He is committed to a non-political, non-partisan approach as head of the Intelligence Community, on which our safety and security depend,” White House press secretary Stephanie Grisham said in a statement Thursday.
Grenell said on Twitter he would not serve permanently and that Trump would “soon” select someone else.
Trump has declined to hire a permanent replacement for Dan Coats, who stepped down as DNI in August after standing firm on the intelligence community’s conclusion that Russia interfered in 2016 to back Trump over Hillary Clinton.
Grenell has previously cast doubt on the extent of Russia’s efforts, saying that Moscow’s activities were nothing new.
Senator Ron Wyden, a Democrat on the intelligence committee, accused Trump of prioritizing “unquestioning obedience over the safety of the American people.”
Grenell has cheered on the rise of right-wing populists in Europe, including hailing Austria’s ultra-conservative chancellor, Sebastian Kurz, as a “rock star.”
He has been unusually outspoken for an ambassador in criticizing the country where he serves, including warning German companies over Twitter to comply with Trump’s orders not to do business in Iran.
Ned Price, a former aide to president Barack Obama, said Trump “has dropped the charade that he has any use for intelligence.”
“He has just named the most political — and abrasive — US ambassador to what it supposed to be the least political — and undoubtedly delicate — role,” he wrote on Twitter. (AGENCIES)