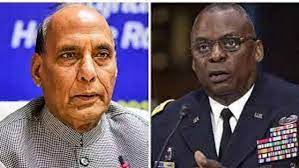 WASHINGTON, Dec 14: US Defence Secretary Lloyd Austin has held a telephonic conversation with Defence Minister Rajnath Singh and reaffirmed America’s commitment to bolster the bilateral defence ties with India and also conveyed condolences over the death of CDS General Bipin Rawat, his wife and 11 armed forces personnel in a helicopter crash.
Gen. Rawat, India’s first Chief of Defence Staff, his wife Madhulika and 11 armed forces personnel were killed on December 8 in the military helicopter crash near Coonoor in Tamil Nadu.
Pentagon Press Secretary John Kirby, at his news conference on Monday, told reporters that Secretary Austin also “reaffirmed the US commitment to strengthening US-India ties and to deepening our defence partnership”.
“The secretary offered his deepest condolences for the loss of General Rawat, India’s Chief of Defence Staff, Mrs Rawat, his spouse, and all the other Indian service members who were involved and killed in that helicopter accident on the 8th of December,” Kirby said.
In a tweet, Singh appreciated the call by his American counterpart.
“Deeply appreciate the telephone call from @SecDef, Mr Lloyd Austin, who expressed his condolences on the demise of CDS General Bipin Rawat, his wife and 11 armed forces personnel,” Singh said.
“Secretary Austin warmly recalled his meeting with Gen Rawat during latter’s recent visit to USA,” he said.
Last week, US Secretary of State Antony Blinken said Gen. Rawat was a “strong leader and advocate for India, and his passing is a great loss for both of our nations”.
“As India’s first Chief of Defence Staff, General Rawat spearheaded a historic period of transformation in the Indian military,” a statement by the US Embassy had said. (PTI)