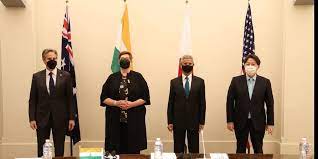 WASHINGTON, Feb 16: US Congressmen have hailed the recent meeting of foreign ministers from Quad countries and welcomed the decision of stepping up trilateral cooperation with India and Taiwan.
Quad or Quadrilateral Security Dialogue comprises India, US, Japan and Australia and foreign ministers of the countries had met recently in Melbourne, where the leaders discussed the destabilising role of China in the Indo-Pacific region and Russian aggression in Ukraine.
“As staunch supporters of closer relations between the United States and Japan, Australia, and India, we are pleased to see the further development of this critical partnership through last week’s ministerial meeting,” said several US Congressmen in a joint statement.
The statement was issued by Congressmen Joaquin Castro, Adrian Smith, Joe Courtney, Mike Gallagher, Brad Sherman, Steve Chabot, and Ami Bera.
Last week’s meeting builds upon the outcomes of the in-person leaders’ summit in September 2021, said the Congressmen, co-chairs of the Congressional Caucuses for Japan, Australia and India.
By advancing cooperation on COVID-19 vaccination delivery, humanitarian assistance, environment, maritime security, counterterrorism and cybersecurity, Quad is advancing a positive vision for the future of the Indo-Pacific rooted in shared values, they said.
The lawmakers hoped that the United States and Quad will continue to engage other countries and multilateral organisations throughout the Indo-Pacific, including the Association of Southeast Asian Nations (ASEAN), which will continue to play a central role in American engagement with the region.
“As the co-chair of both the Taiwan and India Caucuses, I applaud this news. The rules-based order in the Indo-Pacific is only strengthened when democratic partners seek to deepen their ties,” Congressman Steve Chabot said in a tweet. (PTI)