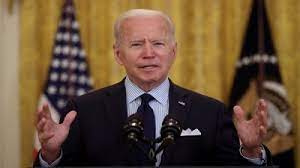 Washington, Sept 15: The US auto manufacturers are in a position today to drive full speed ahead, President Joe Biden has said as he continued with the push to invest billions of dollars in the auto industry in order to make the country leader in electric vehicles.
“The US auto manufacturers are in a position today to drive full speed ahead. I believe we can own the future of the automobile market. I believe we can own the future of manufacturing,” Biden said in his address on Electric vehicles in Detroit, which is considered to be a global capital of the auto industry.
“American manufacturing is back. Detroit is back. America is back. And folks, we’re proving it’s never, ever, ever a good bet to bet against the American people, never, never, never,” Biden said in his address amidst a round of applause from the select audience.
As a result of his administration’s policies, the companies have announced new investments of more than USD36 Billion in electric vehicles and USD48 Billion in battery manufacturing here in the US. “We are just getting started. I signed into law the Inflation Reduction Act that gives tax credits to new electric vehicles, fuel cell vehicles made in America,” he said.
“For the first time, you get a tax credit, if you buy a used electric vehicle that’s all coming. As part of the infrastructure law, we’re investing USD7.5 billion to build electric vehicle charging stations all across America. So today, I’m pleased to announce we’re approving funding for the first 35 states, including Michigan, to build their own electric charging infrastructure throughout their state,” he said.
“We are also going to invest USD7 billion to make American car companies and have the batteries and other critical materials they need. The auto companies like Ford, GM,…Chrysler,” he said.
According to the White House, the President’s economic plan has generated an American, electric vehicle (EV) manufacturing boom that is creating new economic opportunities and tens of thousands of good-paying and union jobs across the country.
Companies like Toyota, Honda, Ford Motor Company, General Motors, and Panasonic have announced investments in manufacturing in North Carolina, Michigan, Ohio, Missouri, Kansas, and elsewhere.
Since Biden took office, companies have invested nearly USD85 billion in manufacturing electric vehicles, batteries, and EV chargers in the United States.
The pace of this investment is accelerating – just in 2022, companies have announced USD13 billion in domestic EV manufacturing – more than triple the investment in 2020. Companies have also announced USD24 billion in batteries – more than 28 times the investment in 2020 – and over USD700 million to support EV charging.
The number of electric vehicles sold in the US has tripled since the President took office.
The Bipartisan Infrastructure Law invests USD7.5 billion to build a national network of 500,000 EV chargers so that charging EVs is predictable, reliable and accessible; more than USD7 billion to ensure domestic manufacturers have the critical minerals and other components necessary to make batteries; and over USD10 billion for clean transit and school buses.
Further, the Inflation Reduction Act provides incentives for buyers of new and used EVs, credits to help manufacturers retool existing facilities and build new manufacturing in the United States, and grants to deploy zero-emission heavy-duty vehicles.
The CHIPS and Science Act will make critical investments in building domestic capacity for the semiconductors necessary for electric vehicles.
Toyota has announced an additional USD2.5 billion investment in a Greensboro, North Carolina manufacturing facility. Honda and LG Energy Solution announced a USD4.4 billion joint venture in a to-be-announced location in the US. Ford Motor Company announced it will invest USD3.7 billion in assembly plants in Michigan, Ohio and Missouri and create 6,200 jobs.
Panasonic announced a USD4 billion plant in De Soto, Kansas that will create 4,000 jobs. Panasonic is also reportedly evaluating a similar investment in an additional new battery factory. Vinfast announced a more than USD5 billion investment in building electric vehicles and batteries in North Carolina that will create 13,000 jobs.
Through DOE’s Advanced Technology Vehicle Manufacturing program, the Department of Energy announced a USD2.5 billion loan in July 2022 to General Motors for battery manufacturing facilities in Ohio, Tennessee, and Michigan. (PTI)