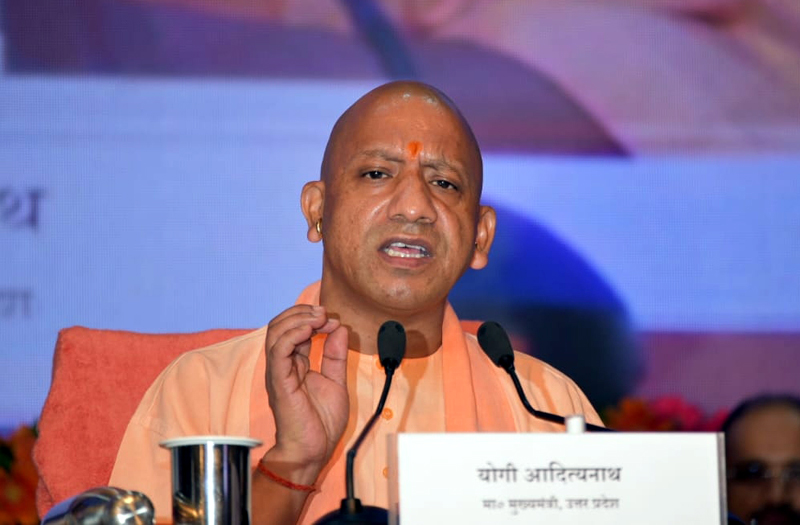 Lucknow, July 4. On completion of 100 days of the 2nd term of Uttar Pradesh Government, Chief Minister Yogi Adityanath said, ‘what we said, we did’. He announced that the construction of 296 KM long Bundelkhand Expressway has been completed and it would be inaugurated by Prime Minister Narendra Modi next week. Work is progressing fast on Ganga Expressway also, Yogi added.
Yogi was addressing a press meet on the occasion of completion of the first 100 days of the second term of his Government,. He said that Uttar Pradesh was advancing towards becoming the growth engine for the country’s economy, and realising the goal of achieving one trillion dollar economy in the next five years in order to contribute substantially to PM’s vision of five trillion dollar economy for the country.
Yogi said that it’s because of the PM’s leadership and concern for the people, especially the poor and deprived people, as well as the Government’s development-oriented policies and efforts that the people of UP were reposing their faith in him and his team election after election. He mentioned in this context the rout of the opposition parties mainly, the SP, BSP and Congress in the recent election to the state legislative council, noting that the upper house has finally become ‘Congress Mukt’ (free of Congress). He also mentioned the debacle of the opposition in the parliamentary by polls held in Rampur and Azamgarh.
CM said that soon after assuming office for the second time in a row, his cabinet selected 10 sectors to push growth of the state and presentations of projects were made by the ministries and relevant departments. Subsequently, PM Modi launched projects worth more than Rs 80,000 crore to accelerate development of the state.
Reiterating his commitment to maintain law and order in the state, Yogi said that illegal property worth Rs 844 crore acquired by the mafia has either been seized or demolished in the first 100 days of his second term. He said that pursuing its zero tolerance policy against crime and criminals, the Government has freed 68,784 encroachment sites and 76,196 illegal parking places from the clutches of the mafia and criminals. He added that 2273 criminals involved in crime against women have also been penalised under POCSO Act. Yogi said that 1.20 lakh mikes have been removed from different places without any noise and whether it is Ram Navmi or Eid, the festivals are celebrated peacefully while no public function is held on streets today.
Yogi Adityanath said that the state has achieved the lowest unemployment rate of 2.9 percent. According to the monthly data of CMIE, the unemployment rate in Uttar Pradesh has reduced to 2.9 percent in April 2022, from 4.4 percent in March this year. Notably, the Uttar Pradesh government, in its previous rule between 2017 and 2022, set a record of providing over five lakh government jobs to the youth of the state. The state has surpassed states like Delhi, Punjab, Rajasthan, West Bengal, Kerala and Tamil Nadu to become the state with the lowest unemployment rate.
CM also spoke on various issues including welfare of the poor, farmers’ welfare, law and order, health and medical facilities, education, infrastructure, investment, employment and self-employment, electricity, rural development, Jal Jeevan Mission and rural water supply. He said, ‘The second term has been given to us by the people of Uttar Pradesh, and taking their trust forward, we have started our journey with a new flight.’