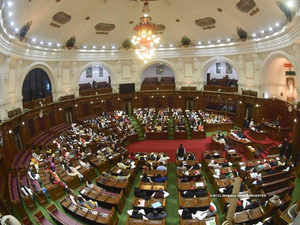 LUCKNOW: The Uttar Pradesh assembly ratified a bill on Tuesday to extend reservation to the Scheduled Castes and the Scheduled Tribes in legislatures for another 10 years, with Chief Minister Adityanath accusing the Opposition of being the biggest opponents of deprived people.

Amid vociferous protests from the Opposition over the contentious citizenship law, the resolution was adopted unanimously by both the assembly and the council before the two Houses was adjourned sine die.

During a brief debate, Adityanath launched a broadside at the Samajwadi Party, Bahujan Samaj Party and the Congress, as he coined an acronym “Sabka” for the three parties.

“Who changed the names of the memorials built in the memory of Ambedkar and Kanshi Ram?” Adityanath asked. “The SP government did not give scholarships meant for the children of SC/ST community.”

The chief minister said his government gave the scholarships and claimed that the BJP had never done discrimination on the basis of caste, community and language.

Adityanath pointed out that when the BJP-led government was formed in 2014, Prime Minister Narendra Modi had said the government would work for every section of the society, be it the Dalits, deprived people, tribals, backwards, forest dwellers and women.

The chief minister also listed the various welfare schemes implemented by the Centre.

His words, however, did not appear to be palatable to the Opposition, whose members soon started raising slogans against the amended Citizenship Act.

Amid noisy scenes by Opposition members before the podium, the resolution to extend reservation to the Scheduled Castes and Scheduled Tribes in Lok Sabha and state assemblies for another 10 years was passed.

The reservation for SCs, STs and Anglo Indians given for the past 70 years in Lok Sabha and state assemblies was due to end on January 25, 2020.

Since the reservation for Anglo-Indians in the form of nomination is set to expire on January 25 as the bill does not extend the facility to the community, some members urged that the matter be taken up at a later stage.

Before the House was adjourned sine die by Speaker Hriday Narayan Dixit, it paid tributes to socialist leader Raj Narain on his death anniversary.

The Parliament recently passed a constitution amendment bill in this regard and it has to be ratified by at least 50 per cent of the assemblies before it becomes a law.