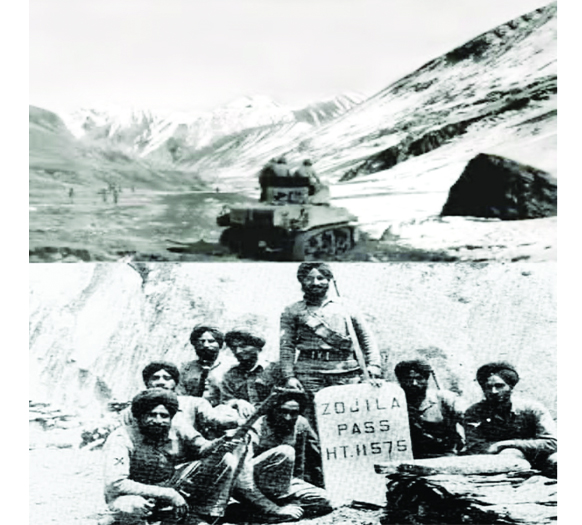 Ninaad Mahajan
Ever wondered the bravery tale of one of the most beautiful passes in the world? Ever wondered the sublime creativity of God for creating such a beautiful place? While travelling to Kargil or Leh from Srinagar, there lies one of the most beautiful passes in the world: “The Zojila Pass,” popularly known as the Zero Point, with an altitude of 11575 feet, also known as the “Gate Way of Ladakh.”
The tourist often stops there to see the beautiful scenery, enjoy Maggie and coffee, and experience some adventurous sports. Zojila is a canyon cutting through the outer Himalayas for miles with steep, rocky, inaccessible sides that vitiate into the Gumri Basin, through which the road continues on a tortuous route via Dras and Kargil to Leh.
74 years ago, on November 1, 1948, one of the greatest battles was fought that saved Ladakh from being cut off from the nation. It is one of the hardest battles fought by any army in the world in the last seven decades. The historic Battle of Zojila is dedicated to the 7th Light Cavalry (Motto: “We Lead”) and its brave hearts, led by the then Squadron Commander Capt. (later Lt. Col.) Sharak Dev Singh Jamwal, who are now known as the saviours of Ladakh.
Why was Zojila important?
Zojila Pass is an integral part of the Great Himalayan Range, which has geographically shaped the destiny of our nation. Zojila means “Pass of Blizzards” and is still the most dangerous pass, with sudden avalanches, landslides, and blizzards claiming several lives. Zojila was the gateway to the Ladakh and Tibet regions then There’s also a Hindu belief with the Himalayas, being the homeland of Lord Shiva. Zojila was the only connection between the Kashmir Valley and the Ladakh region. If Zojila was lost, Ladakh would have been a great loss to the nation and opened a threat to the Kashmir valley.
How did it start?
Before the accession of Jammu and Kashmir to India by Maharaja Hari Singh, the region was guarded by personnel of the Jammu and Kashmir State Force, and within days of the J&K invasion by Pakistan, the Pakistan flag was raised over Gilgit on November 2, 1947, even before the Indian Army could react. After taking control of Gilgit, the Pakistani army made a bold sweep across the Deosai Mountains and Skardu were captured by the end of May 1948. Kargil and Drass towns guarding the approach to Leh, finally fell after a brave fight on August 14, 1948. Pakistani forces had well entrenched themselves with howitzer guns and heavy weaponry across the region. Pakistani forces had also captured the crucial Zojila Pass, which could provide them with a launch pad into the valley making it easier for them to capture the Kashmir valley.
It was because of such circumstances that the then GOC, Sri Division (later 19 Infantry Division), Maj Gen K.S. Thimayya, DSO, decided to dislodge the entrenched enemy at Zojila by the impudent employment of Stuart light tanks of the 7th Light Cavalry along with an infantry assault. He realised that tanks would be the nightmare of the entrenched infantry and a battle-winning factor as getting tanks there in such a tough situation was just impossible, and would be a great shock to the Pakistani army. The task of getting the tanks there at Zojila Pass was then handed to the 7th Light Cavalry and its brave hearts, led by the then Squadron Commander Capt. (later Lt. Col.) SDS Jamwal, who were later known as the saviours of Ladakh.
Till date the road to Zojila Pass is still not good, and it was worst in 1948, when the bridges were weak, the roads were weak, and the credit for converting a five-mile jeep track into a tankable track in record time, that too under the enemy’s nose in a month to beat the snowfall that would have closed the pass, goes to the Task Force of Madras Sappers commanded by Major M.A. Thangaraju. They were indeed a feat without which the tanks couldn’t have reached Zojila.
To everyone’s shock, wireless intercepts showed that Pakistan Army commanders were completely unconvinced about tanks being used at Zojila at such heights and repeatedly said, in disbelief, “Don’t be stupid; I know the roads and bridges are very weak.” No tank can cross them. Impossible those bloody things are probably Jeeps made to look like tanks.
The Battle of Zojila was an outstanding feat of warfare. This unparalleled battle had many sung and unsung heroes. The EME warriors, the artillery, the infantry troops and many more. By 3 pm on 1st November , 1948, Capt SDS Jamwal, the Hero of Zojila Fame, transmitted on his radio to the Regimental Headquarters, “Hello Victor 15, Gumri captured, enemy on the run over.”
On 2nd November, the tri-colour was raised once again on the wind-swept pass. The eventual arrival of tanks at such formidable heights with unbelievable challenges will be a tale of bravery for generations to come and rank top in the toughest battle ever fought by any army in the world.
The most critical factor leading to victory was the endeavour of the courageous tank men of the 7th Light Cavalry and their machines at such unthinkable heights under the ingenious leadership of the Squadron Commander, Capt. SDS Jamwal. Lt. Con (Rtd) Sharak Dev Singh Jamwal is the resident of our own city (Gandhinagar, Jammu), 96 years old living legend and still holds full josh and zeal. We pray for his good health for years to come. (Jai Hind)