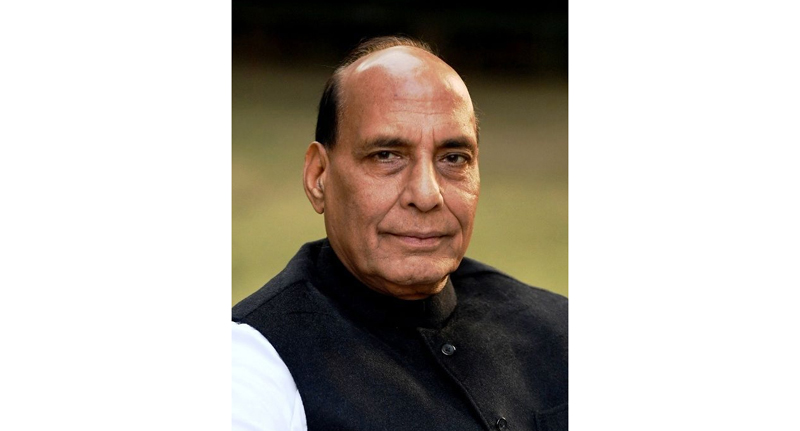 Sanjeev Pargal
JAMMU, Mar 12: Defence Minister Rajnath Singh said today that unrest is increasing among the people of Pakistan occupied Kashmir (PoK) due to Pakistan’s step-motherly treatment and the possibility of people there rising and demanding that they can’t stay with Pakistan and want to be with India can’t be ruled out.
He said Abdullahs, a reference towards two former Chief Ministers of Jammu and Kashmir Dr Farooq Abdullah and Omar Abdullah, and Mehbooba Mufti, the PDP president, should change their mindset and should be willing to contribute to bringing normalcy. Then, God willing, they will be released.
Stating this in an interview to a weekly news magazine, the Defence Minister said they are getting reports that unrest is increasing among the people of PoK, which is occupied territory and has never been a part of that country.
“Pakistan’s attitude towards the people of PoK is step-motherly. They are fed up. We can’t rule out the possibility of people in PoK rising and demanding that they can’t stay with Pakistan and want to be with India,’’ he said, adding this possibility exists as there is increasing dissatisfaction.
The unrest is spreading rapidly (in PoK), he asserted,
The Defence Minister’s statement on PoK assumed significance as recently there have been aggressive statements by the Indian leadership on PoK including Home Minister Amit Shah and Army chief Gen Manoj Mukund Naravane.
Maintaining that political process has started in Jammu and Kashmir, Rajnath, however, said Abdullahs and Mehbooba (Mufti) have to change their mindset and should be willing to contribute to bringing normalcy.
“Then, God, willing, they will be released. I am praying for them; my prayer is that they help restore normalcy,’’ he said.
Rajnath said the fact that a Union Territory has been formed in Jammu and Kashmir is a result of political process and elections have also been held to Block Development Councils and Panchayats. “We want normalcy. Our aim is that Kashmir should be a paradise on earth not just for India, but for the entire world’’.
Referring to the situation along Line of Control (LoC) where Pakistan army has regularly been indulging in ceasefire violations, the Defence Minister said Pakistan is still making attempts to infiltrate terrorists in Jammu and Kashmir but our Army, local police, Central Police Force and Intelligence Bureau are alert and thwarting these attempts.
Today, he added, the situation is better in J&K and it is getting normalized day by day. The number of terrorists in J&K has decreased.
Rajnath charged the separatists with misguiding the youth and instigating them to pelt stones but at the same time they were sending their own children to foreign universities. He added that the people are realizing this and have started asking how anti-national forces are getting funds. Earlier, he asserted, the people didn’t speak out due to fear but now huge section of people is happy that peace is returning.
“Compared to the past, the homegrown terror has decreased. Terror related incidents have gone down. Earlier, there were incidents on a daily basis but they have decreased and the people of Kashmir want peace and tranquility,’’ he said.
On Prime Minister Narendra Modi’s statement that India can defeat Pakistan in a war in 7-10 days, the Defence Minister said that question would arise only if Pakistan had ever won a war as all four times—1948, 1965, 1971 and in the Kargil war of 1999—Pakistan lost to India.
“So where is the doubt whether India will win? Today, we have moved much ahead in capabilities. I would say the result is pre-declared. This is not just my claim, the international community agrees with it,’’ he added.
Responding to a question that if there is Pulwama-II, can we expect Balakote-II, Rajnath asked: “Why should a Pulwama-II happen? It will not, Pakistan knows what will happen if it tries another Pulwama. It knows the answer well’’.
At the same time, he said, India has always tried to keep good relations with its neighbours and recalled that Prime Minister Narendra Modi invited then Pakistan Prime Minister Nawaz Sharif to his swearing-in ceremony in 2014.
“Once, the Prime Minister even went to Pakistan breaking protocol. We have always treated Pakistan as our neighbour but the respect Pakistan should have shown towards India was not there,’’ he said adding Pakistan didn’t respond to our gestures.
“When former Prime Minister Atal Bihari Vajpayee went to Lahore in a bus, the result was Kargil. Pakistan needs to change its attitude. I am confident this will happen,’’ the Defence Minister said.
He added that morale of Pakistan is getting weak as it is suffering economically. “The people of Pakistan wants good relations with India, but their establishment continues to indulge in nefarious act against India’’.
On war rhetoric by Pakistan, the Defence Minister said it is Pakistan Prime Minister Imran Khan who talked about a nuclear threat.
“It is the weak who keep repeating threats. When Imran Khan says they have nuclear capability, he knows our capability is no less,’’ he added.