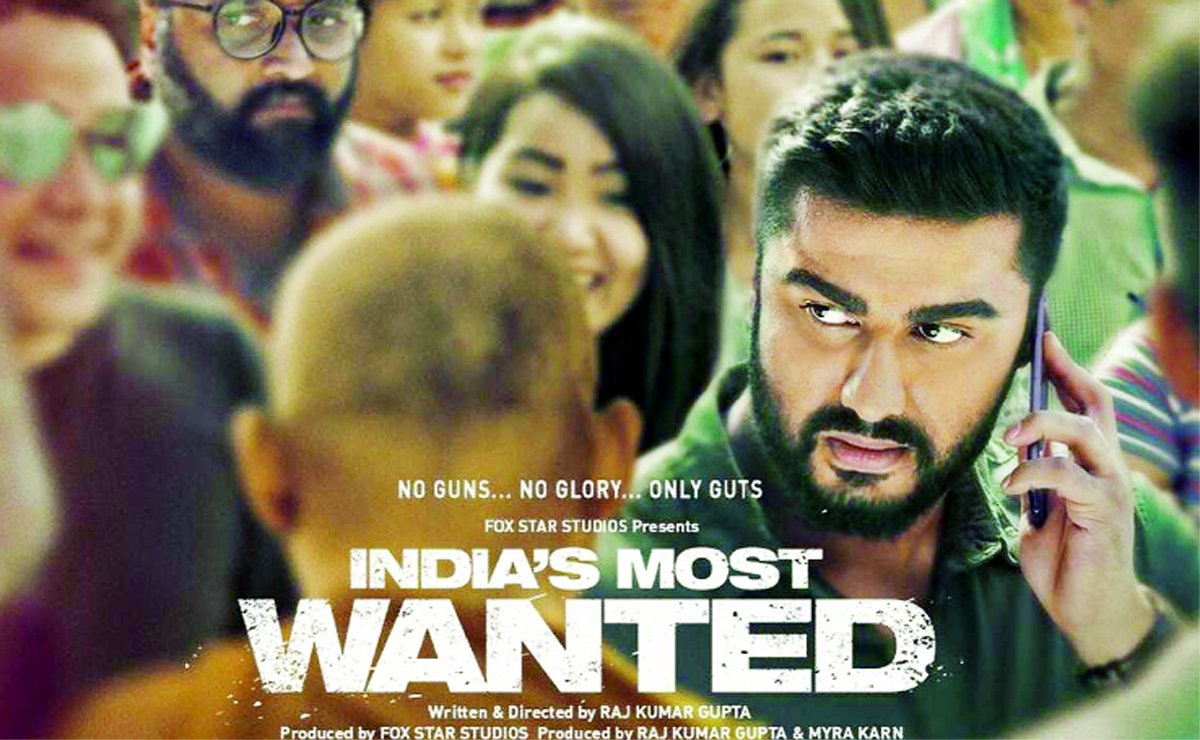 INDIA’S MOST WANTED is the story of a sensational capture of a terrorist. Prabhaat Kapoor (Arjun Kapoor) is an intelligence official based in Bihar and has the reputation of capturing several high-profile criminals. He one day gets a tip from a mysterious source (Jitendra Shastri) about a dreaded terrorist’s hideout in Nepal. This terrorist is none other than Yusuf (Sudev Nair), who has masterminded several terrorist attacks in India. Thanks to his track record, he has been hailed as India’s Osama Bin Laden. After getting permission from his senior Rajesh Singh (Rajesh Sharma) unofficially, Prabhaat leaves for Nepal along with Pillai (Prasanth Alexandrr), Amit (Gaurav Mishra) and Aasif Khan (Bittu). Without informing Rajesh, Prabhaat takes financial and manpower help from Ravi (Bajrangbali Singh) and the team reaches Kathmandu, capital of Nepal. They meet the source and he tells them that Yusuf had met him through his acquaintance Nadeem to send money to Saudi Arabia. But the source doesn’t know where Yusuf exactly resides. Thus begins the hunt for Prabhaat and his team. However, the challenges in front of them are aplenty. They are not authorized to use weapons and are on the mission illegally. Moreover, Pakistan’s ISI have a heavy presence in Nepal and they’ll do anything to save Yusuf from the clutches of Team Prabhaat. What happens next forms the rest of the film.
Raj Kumar Gupta’s story is strictly okay and reminds one of the second half of Akshay Kumar-starrer BABY [2015]. He has tried to remain authentic to the real incident. In doing so, Raj Kumar Gupta’s screenplay suffers. The episode of how the terrorist was nabbed was sensational especially the bit of getting hold of him without firing a single bullet. But in other words, this also means that the film is devoid of action and some real entertainment. Raj Kumar Gupta’s dialogues are nothing great.
Raj Kumar Gupta’s direction is not upto the mark, especially considering his work in the past films like AAMIR [2008], NO ONE KILLED JESSICA [2011] and RAID [2018]. The writing is surely the biggest culprit here but even his direction doesn’t do much to salvage the situation. A few scenes here and there are fine but these are far and few between. The element of thrill is certainly missing. Moreover, the idea of inserting shots of various serial blasts followed by Yusuf’s justification at regular intervals is very random and spoils the film’s narrative.
INDIA’S MOST WANTED starts on an average note. Prabhaat’s entry is intended to be heroic but it doesn’t come out well. The sequence where Prabhaat’s members pool in money for the Nepal trip from their own pocket is moving especially considering that all of them hardly have any savings. This is the only time one can feel for them. Otherwise, throughout the film, one doesn’t really root for them and also they don’t seem convincing about their record of successfully executing some crucial missions in the past. The pace of the film is slow and some scenes just add to the confusion and length. The character of India’s Most Wanted terrorist also is weak. He doesn’t come across as powerful or heinous but thankfully, no attempt is done to show his back story or his sufferings. The interrogation of the source is well executed. The intermission point is quite dramatic. Also, the climax is when the interest really piques. But again, the sequence of Team Prabhaat’s journey from Nepal to India seems rather convenient. The finale is a bit exhilarating and that helps the film end on a somewhat decent note.
Arjun Kapoor delivers a performance that can be called passable. His act is not consistent – in some scenes, he really acts genuinely but in some scenes, he doesn’t seem in complete form. His best act is when he sets his eyes on the terrorist for the first time. Rajesh Sharma is quite dependable. Jitendra Shastri is entertaining, especially his looks and character. Prasanth Alexandrr, Gaurav Mishra and Aasif Khan are strictly okay. Same goes for Bajrangbali Singh. Sudev Nair tries his best to look and act in a heinous manner.
Amit Trivedi’s music is forgettable. ‘Vande Mataram’ doesn’t evoke any sense of patriotism. The club song ‘Dil Jaani’ is forced although it’s hummable. Amit Trivedi’s background score is in sync with the film’s mood.
Dudley’s cinematography is nothing special. Too many aerial shots have been used. Rita Ghosh’s production design is realistic. Rohit Chaturvedi’s costumes are also quite authentic. Parvez Shaikh’s action lacks excitement. Bodhaditya Banerjee’s editing is flawed as the film could have been much shorter.
Courtesy :https://www.bollywoodhungama.com/