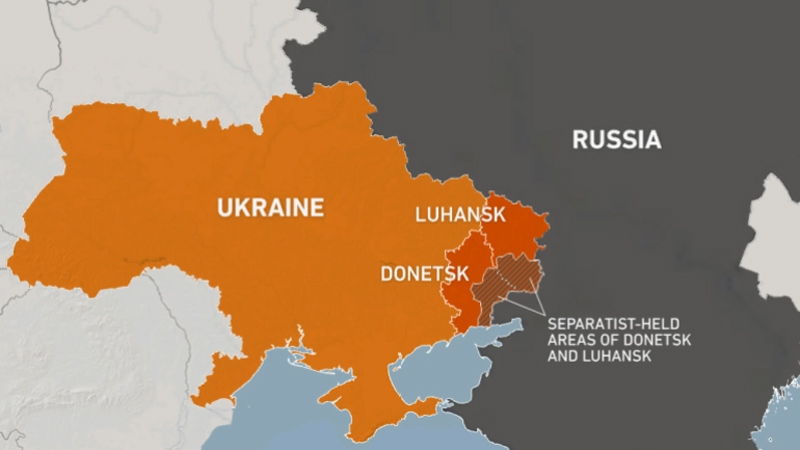 KYIV,  Feb 18:  Spiking tensions in eastern Ukraine on Friday aggravated Western fears of a Russian invasion and a new war in Europe, with a humanitarian convoy hit by shelling and pro-Russian rebels evacuating civilians from the conflict zone. A strong explosion hit the eastern city of Donetsk.

The Kremlin declared massive nuclear drills to flex its military muscle, and President Vladimir Putin pledged to protect Russia’s national interests against what it sees as encroaching Western threats. US and European leaders, meanwhile, grasped for ways to keep the peace and Europe’s post-Cold War security order.

While Putin held out the possibility of diplomacy, a cascade of developments this week have have further exacerbated East-West tensions and fueled war worries.

This week’s actions have fed those concerns: US and European officials, focused on an estimated 150,000 Russian troops posted around Ukraine’s borders, warn the long-simmering separatist conflict in eastern Ukraine could provide the spark for a broader attack.

Vice President Kamala Harris said the US still hopes Russia will de-escalate but is ready to hit it with tough sanctions in case of an attack. US leaders this week issued their most dire warnings yet that Moscow could order an invasion of Ukraine any day.

“We remain, of course, open to and desirous of diplomacy…But we are also committed, if Russia takes aggressive action, to ensure there will be severe consequence,” Harris said at the annual Munich Security Conference.

While Russia snubbed this year’s conference, lines of communication remain open: The US and Russian defense chiefs spoke Friday, and US Defence Secretary Lloyd Austin called for de-escalation, the return of Russian forces surrounding Ukraine to their home bases, and a diplomatic resolution, according to the Pentagon.

Immediate worries focused on eastern Ukraine, where Ukrainian forces have been fighting pro-Russia rebels since 2014 in a conflict that has killed some 14,000 people.

A strong explosion was reported Friday in the center of the city of Donetsk, according to the rebel news agency DAN and an Associated Press stringer there. There were no immediate details on casualties or where it took place.

Separatists in the Luhansk and Donetsk regions that form Ukraine’s industrial heartland called the Donbas announced they are evacuating civilians to Russia starting Friday afternoon. The announcement appeared to be part of Moscow’s efforts to counter Western warnings of a Russian invasion, and paint Ukraine as the aggressor instead.

Denis Pushilin, head of the Donetsk rebel government, said women, children and the elderly will be evacuated first, and that Russia has prepared facilities for them. Pushilin alleged in a video statement that Ukrainian President Volodymyr Zelenskyy was going to order an imminent offensive in the area.

Shortly after his statement, authorities began moving children from an orphanage in Donetsk, and other residents boarded buses for Russia. Long lines formed at gas stations as more people prepared to leave on their own.

Putin ordered his emergencies minister to fly to the Rostov region bordering Ukraine to help organise the exodus and ordered the government to offer a payment of 10,000 rubles (about $130) to each evacuee, equivalent to about half of an average monthly salary in the war-ravaged Donbas.

Ukraine denied planning any offensive, with Foreign Minister Dmytro Kuleba saying that “Ukraine does not conduct or plan any such actions in the Donbas.”

“We are fully committed to diplomatic conflict resolution only,” he tweeted.

Around the volatile line of contact, a UNCHR convoy came under rebel shelling in the Luhansk region, Ukraine’s military chief said. No casualties were reported. Rebels denied involvement and accused Ukraine of staging a provocation.

A surge of shelling Thursday tore through the walls of a kindergarten, injuring two, and basic communications were disrupted. Both sides accused each other of opening fire.

US and European officials were on high alert for any Russian attempts at a so-called false-flag operation, according to a Western official familiar with intelligence findings.

Ukrainian government officials shared intelligence with allies that suggested the Russians might try to shell the areas in the Luhansk region controlled by separatists as part of an effort to create a false reason to take military action, according to the official who was not authorized to comment publicly.

UN Secretary-General Antonio Guterres said the threat to global security is “more complex and probably higher” than during the Cold War. He told the Munich conference that a small mistake or miscommunication between major powers could have catastrophic consequences.

While Russia announced this week it is pulling back forces from vast military exercises that had sparked fears of an invasion, US officials have said they see no sign of a pullback — and instead saw more troops moving toward the border with Ukraine.

Austin said the US believes Russia could launch an attack “any time”.

The Kremlin sent a reminder to the world of its nuclear might, announcing drills of its nuclear forces for the weekend. Putin will monitor the sweeping exercise Saturday that will involve multiple practice missile launches.

The move overshadowed Russian offers of continued diplomacy to defuse the Ukraine crisis.

While the Kremlin insists it has no plans to invade, it has urged the West to keep Ukraine out of NATO and roll back alliance forces from Eastern Europe — demands roundly rejected by Western allies.

Asked about Western warnings of a possible Russian invasion on Wednesday that didn’t materialise, Putin said, “Frankly, I’m not paying attention to that. There are so many false claims, and constantly reacting to them is more trouble than it’s worth.”

“We are doing what we consider necessary and will keep doing so,” he said. “We have clear and precise goals conforming to national interests.”

Putin reaffirmed that Russia was open for dialogue on confidence-building measures with the West on condition that they will be discussed in conjunction with Moscow’s main security demands.

He also urged Ukrainian authorities to implement a 2015 peace deal for eastern Ukraine that was brokered by France and Germany, adding that “regrettably, we are now seeing the exacerbation of the situation in Donbas”.

NATO allies are also flexing their might, bolstering military forces around Eastern Europe, but insist the actions are purely defensive and to show unity in the face of Russian threats.

The US announced the $6 billion sale of 250 tanks to Poland, a NATO member that has been occupied or attacked by Russia in the past. Announcing the deal, Austin said Russia’s military buildup had only reinvigorated NATO instead of cowing it, as Moscow had hoped.

World leaders meeting in Munich warned that Europe’s security balance is under threat. German Foreign Minister Annalena Baerbock said the situation is “calling into question the basic principles of the European peace order”.

Biden planned to speak by phone Friday with trans-Atlantic leaders about the crisis and continued efforts at deterrence and diplomacy, and to give a speech about the situation.

Blinken revealed some conclusions of US intelligence in Thursday’s speech at the UN Security Council, warning that Russia could create a false pretext for an invasion with a trumped-up terrorist bombing inside Russia, a staged drone strike, or a fake or real chemical attack. (AP)