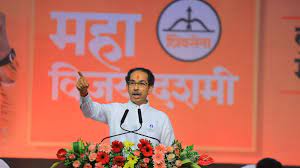 MAHARASHTRA CHIEF MINISTER HAS A HERCULEAN TASK TO REMAIN IN POWER

Is the ongoing Maharashtra political crisis an ideological battle within the Shiv Sena or the inability of Maharashtra chief minister Uddhav Thackeray to convince his Sainiks about his soft Hindutva? Or is it the BJP’s ambition to eliminate all non-BJP governments, or is it for the realignment of political forces? It is perhaps a combination of all.

When Uddhav headed the MVA coalition government in 2019, doubting Thomases were busy speculating how long his government would last. It was because of the heterogeneous nature of the coalition. True to their prediction, Uddhav has been facing crisis after crisis these past three years. Now it has come to a head.

The party faces a vertical split in a fast-developing drama unless there is a realignment of political forces or the two warring factions come together. There is also the danger of the MVA coalition government collapsing.

Uddhav woke up on June 21 to hear about the brewing revolt within his party, led by his cabinet colleague Eknath Shinde. Also, Shinde was not alone as he had mobilized some 30-odd rebel legislators. He now claims that this list has touched 50 legislators including independents. There is every possibility that the Governor will summon a floor test before July 11.The Supreme Court will hear the rebel legislators disqualification issue on July 12.

In the past three years, Uddhav has grown as one of the prominent opposition leaders, rubbing shoulders with powerful chief ministers like Mamata Banerjee (West Bengal) and M.K. Stalin of Tamil Nadu.

Ironically, the present problem is not from the allies but from within Shiv Sena. In an emotional speech, he recently said, “The sad part for me is that my people (Shiv Sainiks) have lost trust in me.”

Ignoring the rebellion within the party brewing for some time, Uddhav kept himself in splendid isolation, attending to Covid relief and opposition politics at the national level. He did not realise that his priority should have been keeping his flock together.

The Shiv Sena and its long-term partner BJP fought the 2019 polls together. The BJP won 106 seats; the Shiv Sena bagged only 56. Together, they would have comfortably formed the government in the 288 seats Assembly. But then the Sena wanted the post of Chief Minister should be shared as discussed before the polls between the partners, but the BJP rejected it. Sena has become the junior partner in the past decade instead of vice versa.

It was not the first time the Sena faced rebellion, as three revolts happened under the watch of its charismatic founder Balasaheb Thackeray. He was a mesmerizing personality, audacious, smoked pipes, wore sunglasses and saffron clothes, and even drank his favourite drink, beer. He was respected by a few but feared by all. Even the Pop King, Michael Jackson, posed with Thackeray and got clearance for his solo concert in India. His ability to create mass hysteria gave him a larger-than-life image though he never contested or held power. A master orator, Balasaheb got his party to power in 1995 and aligned with the BJP in the nineties, which lasted till 2018.. He anointed his son Uddhav as working president in 2003 against his nephew Raj Thackeray. Uddhav is seeing the fourth revolt now.

But his primary miscalculation was taking his Sainiks for granted. He failed to sell his brand of soft Hindutva or the controversial nature of his coalition or alliance with Congress. He also should have been careful about projecting his son Aditya at the cost of some senior leaders. Instead, he remained inaccessible to even his senior ministers.

Thirdly, the Sainiks could not be comfortable with the coalition partners as they had grown for decades fighting the Congress. Some sections of Sena felt that the alliance was damaging the party’s growth.

Fourthly, the rebels apprehend scrutiny from the enforcement directorate, CBI, and income tax officials. They see returning to the NDA as a way out of this harassment.

To escape the rigours of anti-defection law, the Shinde group has to satisfy the test of two-thirds of elected members. NCP chief Sharad Pawar has rightly said the real test would be the floor test. So Eknath Shinde has to win the floor test along with the BJP to dethrone Uddhav.

Uddhav cannot fight on two fronts- the might of the BJP and the growing number of rebels. He may have to compromise or lose both his party and the government. Since Shinde has invoked Balasaheb’s name and ideology in his demands to Uddhav, the Thackeray clan must also ensure keeping Balasaheb’s legacy.

It will be challenging for Uddhav to unite the party. If he does so, he will emerge as a strong leader. He has the advantage because the common workers are with him through many legislators are not. Above all, he has the Thackeray surname. (IPA )