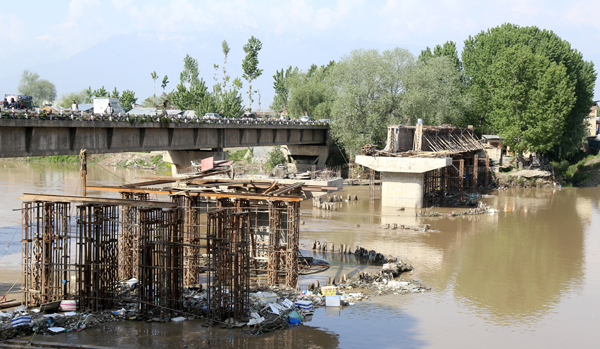 Suhail Bhat
SRINAGAR, Apr 23:  Two vital bridges in Srinagar are awaiting completion for last many years and have missed several deadlines with officials blaming the paucity of funds for the slow pace of the work.
The already existing bridge at Qamarwari popularly known as “Cement Bridge” has historical importance in the Valley as it was the first bridge over the Jhelum River to be constructed in concrete. The bridge is an important link as it connects the Old city, Soura, Hazratbal and Ganderbal areas with North-Kashmir, Qamarwari and Batamaloo.
Pandrathen bridge connects areas like Lasjan, Soiteng and Padhshahibagh to National Highway. The locals from Soiteng, Lasjan, Padshahibagh, Athwajan, Pandhrethan, Batwara, Sonawar and other adjoining areas lamented Government’s lackadaisical approach towards the construction of the “vital connecting link” and accused them with showing indifferent attitude towards the people of the area.
A new bridge in Qamarwari area is being constructed by Roads and Building(R&B) department awaits completion for over six years, while a bridge at Pandhrethan area is incomplete due to paucity of funds.
The newly constructed bridge adjacent to other bridge which was constructed in late seventies in Qamarwari was sanctioned by Government in 2011 to reduce traffic congestion. But the bridge is incomplete and a lot of work is still pending in its construction.
The work on the 127mts long bridge which, according to R&B costs Rs 9.85 crore, was started in June 2011. Despite the end of second deadline which was in March 2018, R&B department has failed to construct the bridge in the given time frame.
“We are not able to reach on time anywhere as it takes us one or two hours to cross jam-packed Qamarwari Chowk,” said an aggrieved commuter.
Meanwhile, the R&B department officials claimed that devastating floods of 2014 in which most parts of Srinagar got submerged and acquisition of land as the main reasons behind the incompletion of construction of the bridge.
“Funds scarcity overstretched the project but the work is going on a full pace now and the bridge will be completed by the end of this year. The work on the beams and girder is almost complete”, said an official of the Department.
The Qamarwari area is one of the most congested areas of Srinagar city and frequent traffic jams in the area have become a major source of inconvenience for the commuters.
With the tremendous increase in the traffic and due to rise of small cars from last 10 years, the Bridge was constructed to ease the pressure on the already existing bridge. “We have to face lot of inconvenience to reach SKIMS Soura due to frequent traffic jams in this area”, said Nazir Ahmad, a patient going for treatment to SKIMS Soura.
Meanwhile, an incomplete bridge at Pandhrethan area of city here has irked the residents of nearly half a dozen areas situated on both sides of the river Jhelum.
“In the absence of the bridge, the locals are forced to walk several kilometres to reach to the other side of the embankment…the Government has failed to live up to their promises,” Abdul Majid, a local said.
An official at Jammu and Kashmir Projects Construction Corporation (JKPCC) said after taking nearly two years in deciding the location for the construction of the Bridge, the Government in 2012 started the construction work on 120 meters double lane bridge at Pandhrethan but lost pace due to the paucity of funds.
“The construction work is moving at snail’s pace. Every time the locals raise the issue of the slow pace, the authorities would give different excuses. At times, the work is completely stopped for days and the authorities would employ a labourer or two to give the impression that the work is underway. They befool people,” the locals said.
They said presently, the Soiteng residents are risking their lives by boarding overcrowded fishing boats to cross the river at Batwara. “The boards could prove fatal anytime. The patients, particularly, expectant mothers have to use the same boats to reach to the other side of treatment and the facility goes off after Sunset as the area falls under a high-security zone,” the locals added.
While revealing their ordeal, they further said that initially the locals demanded construction of a pedestrian bridge at Syed Abad Soiteng, which was the shortest distance to reach GB Pant hospital, and Higher Secondary school situated on the other side of the river but the Government skipped the proposal citing security reasons.
Deputy General Manager JKPCC, Zulfkar Ahmad Parray said initially the construction work was stalled due to non-availability of funds but they have managed to complete the major portion of the bridge.  “Around 80% of the construction work is complete and the remaining 20% will be finished within next two months. The work on the first span and second span is complete and the work on the third span is underway. However, the work was temporarily suspended due to inclement weather and increase in the water level,” he said.
When asked about the slow pace of construction work, he said: “The scarcity of funds hampered the initial pace of work but work is in full swing now and it will be thrown open within next two months. Out of a total project cost of Rs 13.33 crores, only Rs 6.65 crores was released until last financial year which really dented the construction work,” he said.