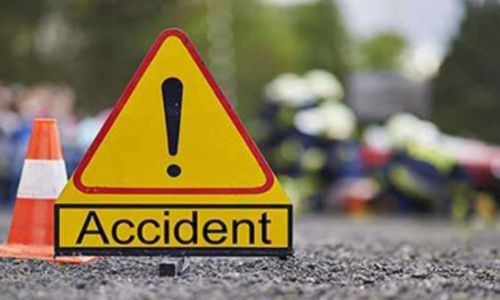 Excelsior Correspondent
DODA, Feb 4: Driver among two persons were killed while another got seriously injured when a vehicle they were travelling in skidded off the road and fell into gorge near Bari area near here late last night.
According to reports, a tipper bearing registration number JK01K-4667 was on its way from Doda to Bharath, when the driver lost control over the vehicle and it plunged into gorge near Army Check Point at Bari area, resulting into serious injuries to three persons.
Sentry deployed at Army Check Post near accident site immediately swung into action and a team led by Sub Yashpal launched rescue operation. On getting information, police team and volunteers of Ababeel (NGO) also reached the spot.

All the three persons were evacuated from the vehicle and shifted to District Hospital Doda, where doctors declared two of them as brought dead, while one injured person has been referred to GMC Jammu for further treatment.
The deceased have been identified as Mohinder Singh (45), son of Panthla Ram of Bijarni District Doda and Surjeet Singh (48), son of Brij Lal of Gijoot Babore, while injured has been identified as Sat Pal (50), son of Mast Ram of Duda Bharath.
After completing medical and legal formalities, the bodies of the deceased were handed over to family members for last rites.
A case under relevant Sections has been registered at Doda Police Station and investigation has been started.