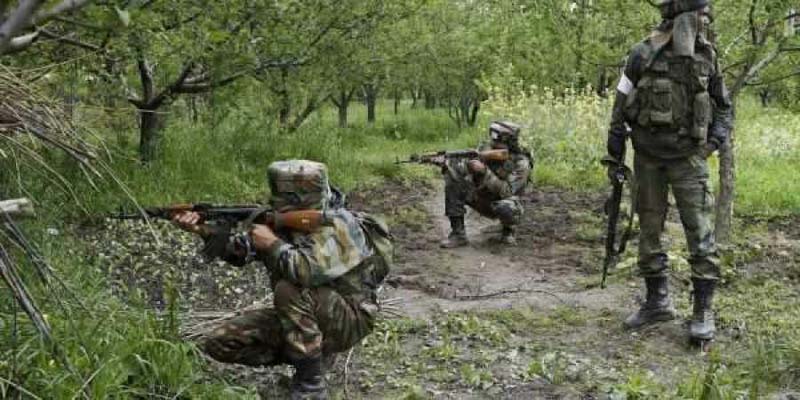 Excelsior Correspondent
SRINAGAR, June 2: Two local Jaish-e-Mohammed (JeM) militants were killed in an encounter with security forces today in Tral area of Pulwama district, police said here.
Giving details, police said that based on a specific intelligence a joint team of police, army and CRPF cordoned off Pamposh colony in Saimoh of Tral, a division under the jurisdiction of Awantipora police.

Click here to watch video
As the cordon was being laid, there was an initial exchange of fire at the crack of dawn between the holed-up terrorists and the security forces and one of them was eliminated, police said.
The other militant was seen running into residential houses, prompting the security forces to launch a cordon and search operation and all the civilians were evacuated.
However, the searches yielded no results, police said.
The determined security forces then continued their hot pursuit for the escaped terrorist but had to face resistance from a small mob of about 40 people who gathered at the encounter site and started pelting them with stones.
But the security forces took effective control of the area as the mob dispersed when they fired tear gas shells and used can-charging.
The forces then continued searching for the escaped terrorist, who was finally found hiding near a water conduit.
After a brief exchange of fire, the second militant was also killed by the security forces, a police spokesperson said.
Incriminating materials, arms and ammunition including two AK rifles, two pistols, 5 AK magazines and two hand grenades were recovered from them, the spokesman said.
He said that due to efforts of the police and security forces, it was a clean operation without any collateral damage.
The spokesman made an appeal to people to cooperate with police till the area is completely sanitized and remain clear of all the explosive materials, if any.
The identity of the militants has not been revealed by police as a new policy during the COVID lockdown.
The authorities had been burying the slain militants in Sheeri area of Baramulla district or Ganderbal area in outskirts of the city to avoid any gathering of locals for funeral prayers, which can lead to spread of coronavirus infection.
Security forces have upped the ante against militants in the Valley over the past two months, killing 44 in April and May. The total number of militants killed in 2020 so far has now reached 88.