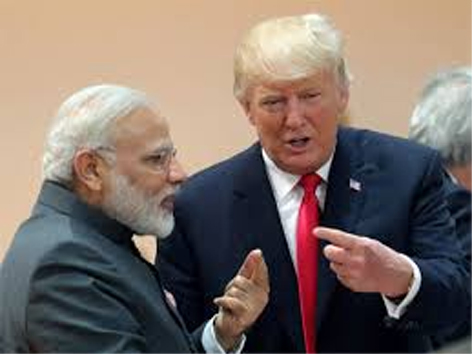 WASHINGTON, Feb 15: President Donald Trump’s upcoming visit to India will be a “delightful spectacle” and “utterly successful” by many measures, eminent American experts on South Asia issues have said.
Trump along with the First Lady are scheduled to visit Ahmedabad and New Delhi on February 24 and 25, according to a White House announcement early this week.
This would be president’s first bilateral visit in the third decade of 21st century and also the first after his acquittal by the Senate in the impeachment trial.
“I think the Trump visit will be a delightful spectacle and utterly successful by many measures,” Ashley Tellis, who is Tata Chair for Strategic Affairs and a senior fellow at the Carnegie Endowment for International Peace, said.
Trump is expected to get a roaring welcome by lakhs of people when he arrives in Ahmedabad, Gujarat.
He along with Prime Minister Narendra Modi are expected to deliver a historic speech in front of hundreds and thousands of people at the newly build Motera stadium, the largest cricket stadium of the world.
One of the most prominent experts on India, Tellis, however, noted that at the moment, he was unsure whether the trade disputes between the two countries will be resolved.
Senior government officials are tight lipped on this issue, except for making comments in recent past that the two countries are on the verge of a trade package or a mini trade deal.
“Although the GOI (Government of India) has claimed that both sides are close to a deal, I don’t think there has been real progress — certainly none that will satisfy USTR (US Trade Representatives). We might get some progress on defense sales, but that’s uncertain too,” Tellis noted.
“Still, both the countries have done well where defense cooperation is concerned under the Trump administration, which is more than can be said for many other US relationships with its allies. I expect this will further deepen in the years ahead,” he said in response to a question.
“Even if the visit then produces only good optics, I’ll take it all the same if it strengthens Trump’s perceptions of India as a friend. Given his mercurial personality and policies, that is not a small achievement — and I think PM Modi understands that well,” Tellis said.
Rick Rossow, Wadhwani Chair in US India Policy Studies at the Center for Strategic and International Studies, hoped that the two leaders can finalise an agreement to remove some of the recent trade irritants.
“My own view is that India keeps digging a deeper hole in triggering trade tensions–notably through steep customs hikes in its February 1 Union Budget. So, a short-term deal may simply be a reprieve in our trade fight,” Rossow told PTI.
Observing that Trump will be the fourth consecutive president to travel to India, and the second consecutive president to visit India in his first term in office, Rossow was of the view that a visit to India is no longer a significant event.
“India is a large and growing market for exports and an emerging security partner for the United States… Particularly important as we consider options to further draw down our forces in Afghanistan and seek a network of burden-sharing in areas where China’s rise poses a threat. India will be important on both counts,” Rossow told PTI.
According to Anish Goel, Senior Fellow at New America and former senior White House official, Trump’s upcoming visit is consistent with long-standing policy in both countries to continue strengthening and cementing the bilateral relationship.
“The visit will be a political boon for both the President (Trump) and the Prime Minister (Modi). India is one of the few countries where the President is quite popular. So he can expect a massive turnout for his rally in Ahmedabad. Similarly, the Prime Minister will most certainly get a boost in support from hosting the President,” Goel told PTI.
At the very least, Trump will provide Modi with a welcome distraction from his recent domestic difficulties, he said.
“It is an important and positive step in bringing the two countries closer together. The timing is also significant as this is the first visit by a US President during a year in which he is facing re-election. That itself is a signal of the importance of this relationship for the United States,” he added.
“The deliverables for the visit will surely focus on defense and trade. India has already announced USD 3.5 billion in new defense purchases to be signed during the visit. And everyone is hopeful that a deal normalising the trade relationship will be announced,” he said.
The trade deal was expected last September when Modi visited New York and met Trump but the differences could not be worked out in time.
The White House would not have agreed to this visit to India unless the trade deal was nearing completion in earnest. Outside of trade and defense, the deliverables will likely be modest, Goel said.
“It is important for the President and the Prime Minister to have a comprehensive bilateral meeting in which all critical issues, including Pakistan, are discussed. The strategic partnership between India and the US depends on more than trade and defense sales so it is imperative that they address other strategic issues as well,” Goel said. (PTI)