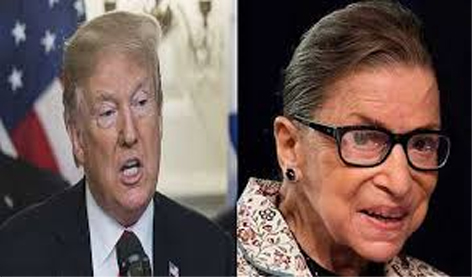 WASHINGTON, Sep 22: US President Donald Trump said that he is considering five women for the Supreme Court seat vacated by the death of liberal Justice Ruth Bader Ginsburg. Speaking to reporters at the White House before leaving for state of Ohio to campaign, Trump said they are being “vetted very carefully” and that he has spoken to some of the candidates and will also have some in-person meetings.
The president said the announcement of his pick will be on “probably Saturday, but Friday or Saturday.” He added that he would rather see a full Senate vote on his nominee before Election Day, which falls on Nov 3 this year, a move intended to cement a 6-3 conservative majority on the court. Judges Amy Coney Barrett, Barbara Lagoa, and Allison Jones Rushing are said to be on Trump’s shortlist.
Barrett and Lagoa, both confirmed in bipartisan votes by the Senate, are reportedly top contenders. Ginsburg died last week due to complications of metastatic pancreas cancer at age 87. A renowned champion of women’s rights and liberal icon, Ginsburg was appointed to the US high court by then-President Bill Clinton in 1993. She was the second woman appointed to the bench and served more than 27 years.
As the country continues to be saddened by her death, a partisan debate is raging over whether and how swiftly the Senate, which is responsible for confirming or rejecting nominations by the president, should move to fill the empty seat.
Senate Judiciary Committee Chairman Lindsey Graham, a South Carolina Republican and Trump ally, told committee Democrats in a letter on Monday that he intends to “proceed expeditiously to process any nomination made by President Trump to fill this vacancy.”
Democrats are accusing Republicans of hypocrisy because they argued in 2016 that voters should weigh in before then-President Barack Obama tried to fill a Supreme Court vacancy in that election year. Republicans hold a 53-47 advantage in the Senate, but two of them have said they believe the chamber should not move forward with a Trump nominee, whose confirmation requires a simple majority.
Ginsburg will lie in state at the US Capitol on Friday, becoming the first woman in history so honored. A separate ceremony will be held Wednesday morning at the Supreme Court for Ginsburg’s family, close friends and members of the court. Ginsburg will be buried at Arlington National Cemetery, which is across the Potomac River from Washington, DC, according to the Supreme Court. (UNI)