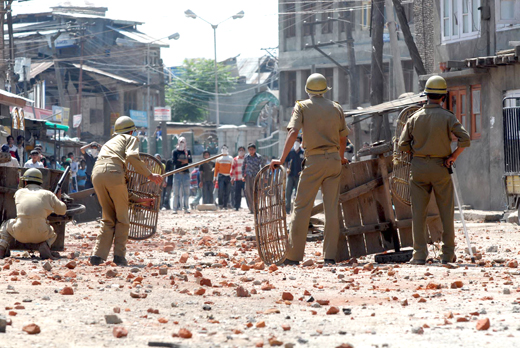 Srinagar, Mar 17: Security forces today arrested a militant associate of The Resistance Front (TRF) outfit in North Kashmir’s Baramulla district.
Police said that acting on specific information regarding movement of anti-national elements in Karhama Kunzer area of Baramulla, a joint cordon and search operation was launched by police, 2RR and 176Bn of CRPF in the area.
During the search, one militant associate of TRF was arrested by the joint search party. He has been identified as Waseem Ahmed War son of Mohammad Ismail War, resident of Karhama Kunzer.
“Incriminating materials, arms and ammunition including one hand grenade, two AK-47 magazines and 20 live rounds were recovered from his possession”, police said.
Police arrested several youth, who were allegedly involved in stone pelting and arson post encounter at Nowgam area of Srinagar yesterday.
A police spokesman said that on 16-03-2022 at Shankarpora Nowgam Srinagar, three categorised militants of LeT/TRF were killed.
“As per the SOP, the site was being cleared to ensure the safety of citizens. Accordingly, signboards were also placed around the site of encounter, while it was being sanitized, to dissuade citizens from approaching the site prior to sanitization with regard to any left-over explosives from terrorists that could cause damage to locals.”
“However, a large unruly mob consisting of young boys assembled near from adjacent areas near Shankerpora Wanabal carrying lathies and stones in their hands and tried to pelt stones on the deployed nafri, which was asking them not to approach the site or encounter before being cleared of explosive debris.”
Police said that in order to disperse the mob, smoke shells were used, as per the SOPs.
A case (FIR number 46/2022 under relevant Sections of law) was registered in Police Station Nowgam and some youth were identified from videos and from initial investigation, many of these were picked up and are being examined in the said case.
“Some of them have been arrested as well. Srinagar Police urges all citizens to stay away from encounter sites so to ensure their own safety, keeping in view the likelihood of left over explosives from the militants,” police said
Inspector General of Police (IGP) Kashmir zone, Vijay Kumar, today said only those who have family history of militancy, stone pelting background and those who come under the influence of online propaganda, pick up arms.
Speaking to reporters after flagging-off Bharat Darshan Tour of youth in Central Kashmir’s Budgam district, Kumar said that police doesn’t organize tours and other recreational programs only to keep youth away from militancy but to explore the hidden talent of youth.
“It is not like every youth joins militancy. Only those with family history like if somebody’s brother, uncle or some other family member has been killed. Also those with background of stone pelting, and those who come under the influence of online propaganda, pick up arms,” he said.
He said that parents of children who go missing, directly approach police, lodge missing report, and then help police to bring back their sons. “In many cases, youth join back their families. Those who don’t come back, we give them ample chances even in live encounters to surrender. Those who still don’t, get killed,” the IGP Kashmir said.
He said the OGW network is a big challenge for the police force. “OGWs don’t remain OGW forever and that’s why we call them Hybrid militants. OGWs carry out militant activities and then remain silent for many months. It becomes difficult for us to identity them even though we have arrested 150 OGWs this year so far,” he said.
About safety measures for policemen and other security forces going on leave in the wake of recent killing of a TA soldier in Budgam and a CRPF man in South Kashmir, he said revised Do’s and Don’ts have been issued to the policemen, CRPF personnel and even Army men intending to visit homes on leave. “These SOPs are being reviewed from time to time,” he said.