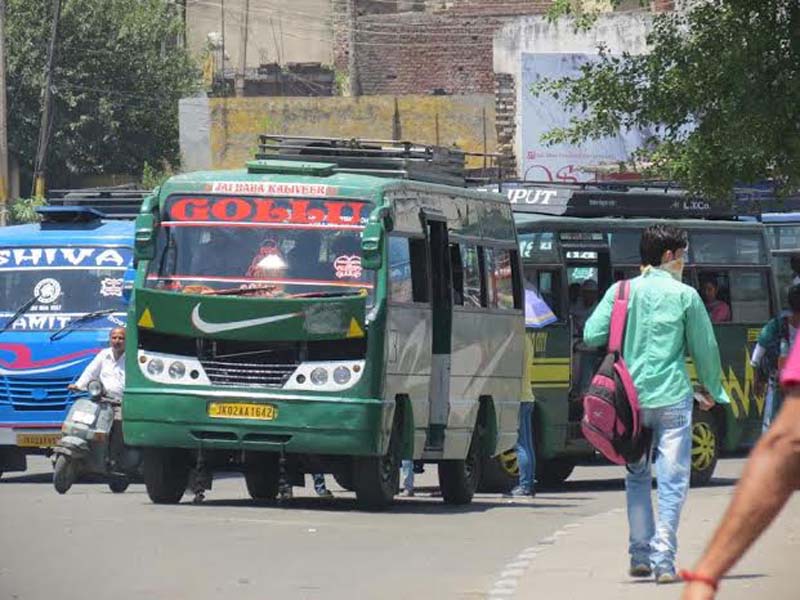 Excelsior Correspondent
JAMMU, Oct 16: Intensifying their struggle against the installation of Toll Plaza on Jammu -Pathankot National Highway at Sarore in Samba district and failure of Government to concede their other demands, the transporters have given a call for indefinite chakka jam from Lakhanpur to Kashmir valley.
This was stated by T S Wazir, chairman All J&K Transport Welfare Association and former MLC while talking to Excelsior here today. He said that the Association had given 24 hours ultimatum to Government regarding conceding the long pending demands of the passenger transporters including abolition of Toll Plaza at Sarore but the stoic silence maintained by Government on the demands has forced them to go ahead with its strike call.
Wazir said the passenger transport will remain off the roads right from Lakhanpur to Srinagar including all districts of Jammu region on the call of Association from tomorrow till the demands are conceded in letter and spirit. “The transporters have already been hit hard by the new Motor Vehicle Act enforced by the Government and taking the wrong advantage of the new law, police and traffic police are making a total monopoly and harassing the transporters on the road”, he added.
Transporters alleged there is no check on the monopoly of police and Traffic Police by the Government. Moreover nine percent one time Tax for registration of new vehicles is also unjustified and the transporters are already suffering due to economic slowdown and last 30 year long turmoil in the State can’t pay such hefty tax. “We demand the same be revoked immediately to relieve the transporters of the extra burden”, they added.
They said installation of new Toll Plazas on the National Highway in J and K especially one at Sarore and levying of huge Toll Tax on transporters at Toll Plaza is another highhandedness of the Government on hapless transporters. The transporters who are already under the burden of various other taxes including the increasing rates of spare parts fuel etc can’t afford to pay the huge road use tax when the same is paid by them while purchasing the vehicles, they added.
While terming the installation of Toll Plazas on National Highway totally illogical and unjustified they said that the Government should immediately abolish it to relieve the operators of public transport of unnecessary harassment and burden.
Meanwhile, the public transport remained off the roads in Samba and Kathua districts for the third consecutive day today with no passenger bus and mini bus plied on Jammu to Kathua and Samba as well as interior routes in twin districts. The daily passengers including Government employees and students continued to face problems in reaching their offices and colleges in the two districts due to transport strike.
The Jammu-Kathua Bus Transport Union, which also held a demonstration and shouted slogans, said that their strike will continue till Toll Plaza is abolished. The protest was led by Kuldeep Singh, Union president.
He said the passenger transporters can’t pay toll and when in 2013 BJP activists had uprooted the Toll Plaza forcibly at Sarore what logic their Government at Centre has to install the same after six years. He said there is no response from Union Surface Transport Minister, Nitin Gadkari and he had failed to respond despite a letter written to him by BJP chief Ravinder Raina demanding abolition of Toll Plaza.
Meanwhile, the National Democratic Party of India (NDPI) has extended full support to transporters strike. State president of the Party, Rajesh Gupta urged the Government to abolish the Toll Plaza at Sarore immediately or otherwise face the wrath of the people.