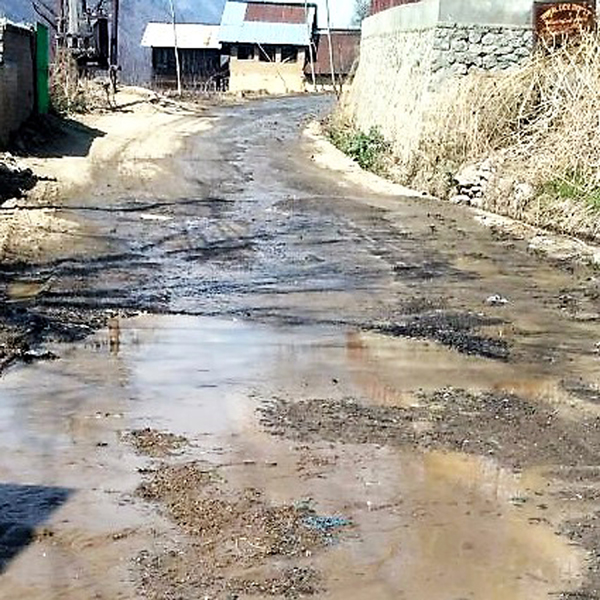 Suhail Bhat
SRINAGAR, Mar 30: People living in dozens of villages located along the Tral-Arihal road in South Kashmir’s Pulwama district  have to wait for a few more years to see the road getting blacktopped, even as they continue to suffer.
The locals said that the work on the newly approved road is going on at snail’s pace, creating inconvenience to hundreds of commuters every day. “It was after waiting for 12 years that Government started the blacktopping and widening of our road but frequent interruptions have only added to our woes,” Mohammad Sultan, a resident of Arihal said.
With an estimated cost of nearly Rs 34 crores the Roads and Buildings Department picked up the widening and blacktopping of the 11 kilometres stretch road from Tral to Arihal.  “The project was supposed to be completed in one year,” an official at Roads and Buildings Department said.
Locals lamented that seven months have passed but the road is far from completion, “We are facing a tough time due to lack of proper road. For last 12 years our travel experience has been worst  due to pathetic condition of the 11 kilometres stretch road,” Ali Mohammad, a local said, adding the patients and students are bearing the brunt of the dilapidated road surface.
The locals said they thought that the project would end their decade long suffering but the slow pace of work has dashed their hopes, “It seems we have to suffer more as the project is nowhere near completion,” the locals rued.
MLA Tral , Mushtaq Ahmad Shah,  when contacted said the unpredictable security situation was the reason behind the delays in work. “The work was stopped several times and that delayed the project but the construction work is in full swing now,” he said.
He added the widening of the road is underway and that is the reason for its bad shape, “once the process of widening is complete the black topping will follow,” he said, adding the road widening was taken up to meet the long pending demands of locals.
An official at Roads and Building Department said that the road is unlikely to get completed by the end of this year but they are putting extra efforts to meet the allotted deadline. “Repeated shutdowns and bad weather were the reasons behind the slow pace of work,” he said, adding, they are mulling to blacktop first half of the road before the deadline is over.