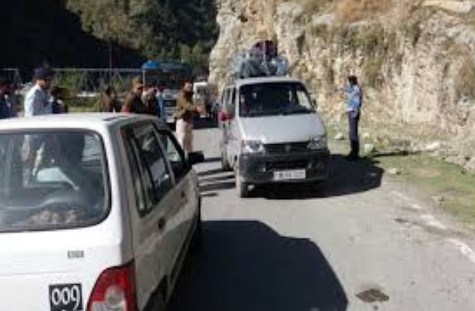 SRINAGAR: Traffic on historic Mughal road was restored after remaining suspended due to landslides, triggered by rain on Sunday afternoon, official sources said.
Heavy Motor Vehicles (HMVs) will continue to ply one side only while Light Motor Vehicles (LMVs) will ply from both sides on the Mughal road, connecting Shopian in south Kashmir and Rajouri and Poonch in Jammu region, sources told UNI on Monday.
Traffic was suspended on the road due to landslides at Sukhsari, about 22 km from Shopian on Sunday afternoon. “However, district authorities from both sides immediately put into service sophisticated machines and cleared the landslides and put through traffic. We cleared all stranded vehicles till late in the night on the road”, they said, adding that normal traffic was allowed on Monday.
HMVs was allowed from Srinagar to Jammu via Shopian-Mughal road-Rajouri from 1200 hrs to 1800 hrs from Hirpora Shopian. No HMV will be allowed from opposite direction.
LMVs will be allowed from both sides on the road, which is seen as alternative to Srinagar-Jammu national highway. The Government of India (GoI) has already sanctioned a tunnel to make it all weather road, which remained closed during winter months due to accumulation of snowfall.
(AGENCIES)