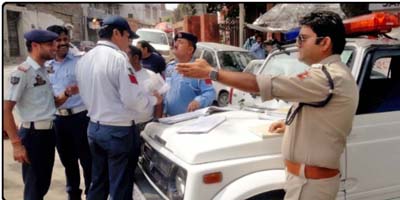 Excelsior Correspondent
JAMMU, May 12: In wake of incidents of road mishaps, Traffic Police City Jammu has launched a massive vehicle-checking drive in the city.
During the drive, number of two-wheeler riders were prosecuted for not wearing helmets and triple-riding and also for driving without driving-license in the operation that continued for four hours.
The checking drive was carried out simultaneously at Kachi Chawni, Indira Chowk, Bakshi Nagar, Janipur, Dogra Chowk, Bikram Chowk, Gandhi Nagar, Narwal and Satwari.
SSP Traffic City Jammu Joginder Singh said that the drive was aimed at tightening noose of violators in the city.
Talking about the significance of helmet-checking, SSP said the rise in numbers of vehicles in the city have gone up tremendously, thus giving rise to the accidents.
SSP pointed out that the road accidents take place primarily due to rash-driving, which they would try to check by every means.
SSP said that the drive is already being conducted for seat-belt checking across the city. Such drive against the car-owners will continue until the drivers make it a habit for the car drivers to fix seat-belts before setting out, he added.
The drive was conducted by DySP Traffic City (North) Jammu, Sunny Gupta, under the supervision of ASP Traffic PD Sharma. This drive was overall supervised by Joginder Singh, SSP Traffic City Jammu.