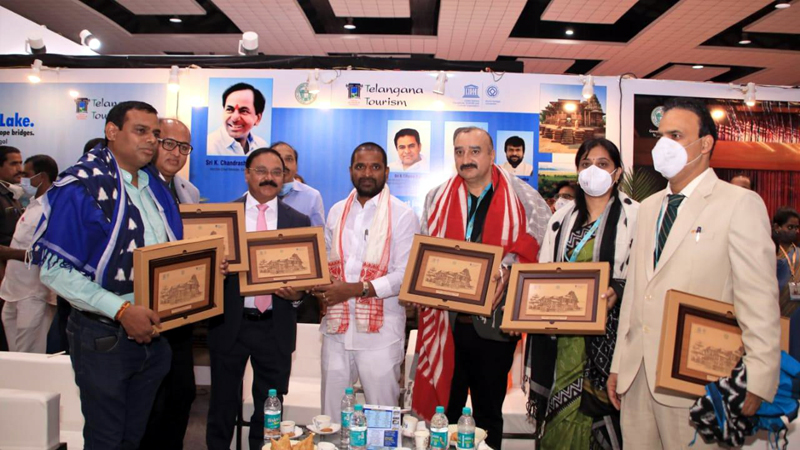 SRINAGAR, Dec 5: In order to invite more tourists from South India especially from Telangana State, the Department of Tourism, Jammu and Kashmir participated in the IITM held at Hitex Convention Hall, Izzatnagar Hyderabad from 03-05th of December 2021.
The expo was also attended by more than 20 States like Karnataka, Rajasthan, Gujarat, Goa, UP, Bihar etc. including the host State of Telangana.
Three day event was inaugurated by the Minster for Tourism, Culture and Archaeology Government of Telangana V Srinivas Goud, while interacting with the participating state representatives he assured full cooperation of Government of Telangana and announced that a special desk will be opened in the office of Directorate of Tourism Telangana for assisting stakeholders in smooth interchange of best practices between Telangana and J&K.
On his Visit to the J&K Pavilion, the Minister was presented a momento by Mr Sher Singh CEO Patnitop Development Authority.
Uppala Srinavas Gupta, Chairman T.S. Tourism Development Corporation Limited, Nagesh Pampati (Chairman TAAI, Telengana), Liaqat Ali (President, TOAT) and other prominent representatives of Tourism Bodies also visited the J&K Stall.
The J&K Tourism stall was attended by a good number of visitors and their enquiries were addressed by the Exhibitors and Official representatives.
On the sidelines of the exhibition a road show was also organised by the J&K Tourism, under the title, “J&K Tourism – New hopes New destinations” for presenting new destinations , experiences and for showcasing the initiative taken by the Tourism Department in offering best services and products to intending tourists. These 75 new destinations have been identified by the department for their promotion as a part of celebrations of 75th Year of Independence under the caption Azadi Ka Amrut Mahat Utsav which generated great interest of the prospective tourists and tourism players.
From the Department, the event was attended by Sher Singh CEO Patnitop Development Authority, Dr Zahoor Ahmad Raina CEO Gulmarg, Mohammad Sajid Kirmani Tourist Officer J&K Tourism Office Hyderabad besides other officials.

OBCs ignored for 8 yrs, only NC can ensure their welfare: Rattan