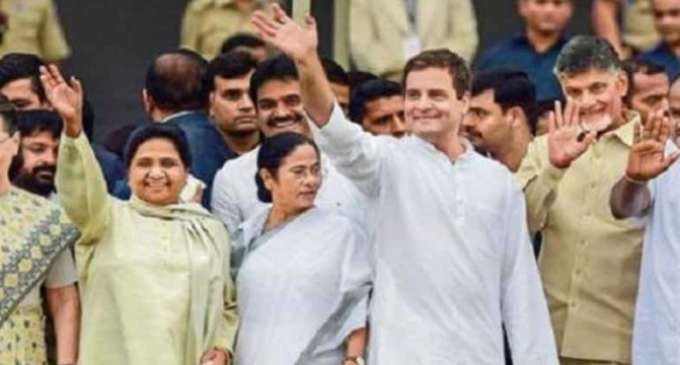 NEW DELHI, Dec 10: Top leaders of 21 opposition parties, barring the BSP and the SP, today met here and vowed to forge a united front to fight and defeat the BJP in the 2019 Lok Sabha elections, alleging “systematic denigration of democracy” and assault on the Constitution and institutions like the RBI under the BJP Government.
The Bahujan Samaj Party (BSP) and the Samajwadi Party (SP), who are major players in politically crucial Uttar Pradesh, skipped the meeting held on the eve of the winter session of Parliament starting tomorrow but no reason was given.
It is for the first time that AAP leader and Delhi Chief Minister Arvind Kejriwal and his Andhra Pradesh counterpart and TDP supremo Chandrababu Naidu attended a joint opposition meet.
The meeting held in Parliament House annexe also came a day ahead of the results of Madhya Pradesh, Chhattisgarh, Rajasthan, Telangana and Mizoram Assembly polls.
After the meeting, the opposition leaders said their parties decided to get together irrespective of their political ideologies due to “democratic compulsions”, to help protect the country, the Constitution and its institutions which allegedly were under attack by the BJP and the RSS.
They said the opposition leaders will meet again and chalk out a strategy to oust the BJP from power and will move jointly forward and prepare an action plan in the coming days.
A joint statement issued later said India needs a government, for which Democracy is the “magna carta” beyond the victories and losses of electoral battles.
“Innumerable deficiencies, failures and plausible doubts on the neutral functionality of EVM’s per se have raised a question on the neutrality of poll process itself. It is our firm belief that this needs to be redressed without question and without delay,” it said.
“It is in the interests of safeguarding and strengthening our Constitutional Republic and People’s livelihood that this RSS/BJP government is ousted,” the statement said, calling upon all secular progressive parties to join hands.
Leaders of the Congress, Left parties and various regional parties like the Nationalist Congress Party (NCP), DMK, All-India Trinamool Congress (AITC), Telugu Desam Party (TDP), Janata Dal (Secular), Aam Aadmi Party (AAP) besides some small parties were present during the meeting. In all, 21 opposition parties attended the meeting, according to a participant.
Among some of the prominent leaders who attended the meet were former prime ministers Manmohan Singh and H D Deve Gowda, UPA Chairperson Sonia Gandhi, Congress president Rahul Gandhi, NCP chief Sharad Pawar, TMC chief Mamata Banerjee, DMK’s M K Stalin and RJD’s Tejashwi Yadav.
Rahul Gandhi said the meeting was very productive and everyone decided to stop the BJP from further assault of institutions and the Constitution.
“The voices in the room are the voices of opposition in the country. We respect every single of them, regardless of how big or small they are. The goal of everybody is to defeat BJP and protect India’s Constitution and our institutions.
“There was consensus in the room that we have to stop BJP’s assault on Constitution and all our institutions like the CBI, RBI and Election Commission. There was consensus that BJP’s corruption on Rafale, demonetisation is simply not acceptable.
“We are going to fight it. We are going to do whatever we can to expose it. There was a consensus that we are going to work together to defeat the BJP-RSS combination,” Gandhi told reporters after the meeting.
The Congress chief said the opposition leaders will hold similar meetings in future also, both inside and outside Parliament and chalk out a joint strategy.
To a question on SP and BSP not attending the meeting, Gandhi said, “The process is to bring together everybody and this process is going to be carried out in an open, friendly and respectful manner”.
Naidu, who coordinated with all parties to convene the meeting, termed the parleys as “historic” and said “this is an anti-BJP platform”.
“The main motto is ‘Save India, Save democratic institutions’. Therefore, we all have joined together. This is a national voice….For last so many days, there has been an attack on institutions like the CBI, the ED, the IT, and today the RBI,” he said.
“That is why irrespective of our political compulsions, we have joined here. It is a democratic compulsion. We want to protect this nation and save the nation and protect its institutions,” Naidu said, adding that the opposition parties will jointly take up an action programme inside and outside Parliament.
“We have to join together. 2-3 parties are outside. We will pursue with them in the interest of the nation. Ultimately, this government should go. Otherwise, there will be greater damage to this great nation.”
Banerjee proposed that the meeting should continue tomorrow and leaders of opposition parties should also meet President Ram Nath Kovind over Urjit Patel’s resignation as RBI Governor. Patel’s announcement came when the opposition meeting was underway.
“The BJP is behaving like a dictator. There should be a campaign against this rule. Everybody has agreed to that,” she said. (PTI)