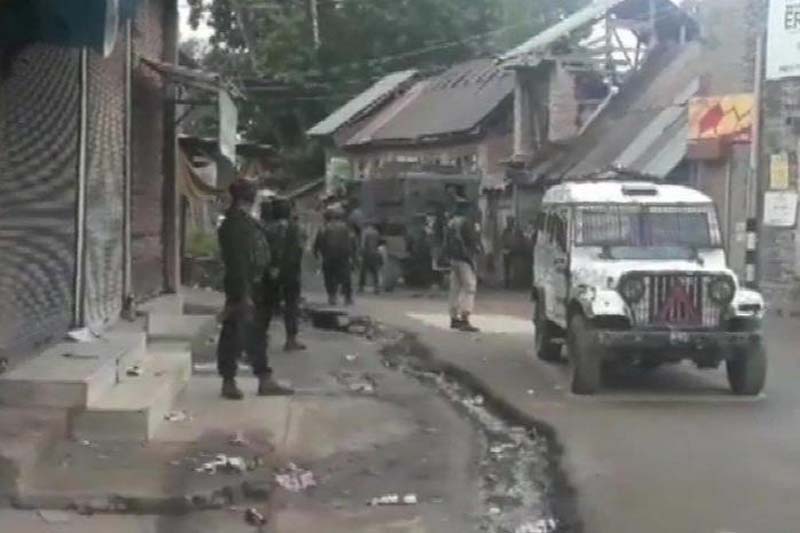 Srinagar, July 27: A top Jaish-e-Mohammad (JeM) commander and his associate were killed in a gun battle with security forces in South Kashmir’s Shopian district today.
Security forces last night cordoned off Banday Mohalla in Bonbazaar area of Shopian after inputs about presence of two militants hiding in the village.
As the security forces cordoned off the area, the militants who were hiding in a house, took shelter in a shed outside it. Early today as the security forces were looking for the militants, they fired on troops leading to a gun battle. Click here to watch video
Two militants were killed in the operation and bodies were retrieved. One of militants was a top commander of JeM of South, Munna Lahori from Pakistan and another has been identified as Mir Zeenatul Islam of Turkawangam, Shopian.
According to the police records, Zeenat was part of groups involved in several acts of militancy. “Several terror crime cases were registered against him including a case FIR No. 25/2019 pertaining to abduction and killing of a civilian Irfan Hameed of Zainapora. He was also involved in case FIR No. 23/2019 of PS Zainapora Shopian”, police said.
“Similarly Munna was also involved in planning and executing series of terror attacks on security establishments and many other civilian atrocities in the area. He was involved in case FIR No. 125/2019 pertaining to IED blast on security forces in Arihal area of Pulwama on 17-06-2019 in which 2 security force personnel were martyred. Several other terror crime cases were registered against him. He was also responsible for recruitment of locals to the terrorist ranks”, police said.
“Incriminating material including arms and ammunition was recovered from the site of encounter. All these materials have been taken in the case records for further investigation and to probe their complicity in other terror cases”, Police said.
In the meantime, an Improvised Explosive Device (IED) planted on a road by militants in Arihal area of South Kashmir’s Pulwama district, exploded last night.
Militants triggered the IED, planted in the middle of road, in Arihal village of Pulwama at around 9:45 pm. Sources said that it was planted to inflict maximum damage to the security forces moving on the road. However, the IED exploded without hurting anyone.
This was for the second time that the IED blast took place in Arihal area in two months. Nine soldiers were injured on June 17 this year when militants triggered an IED during the night.