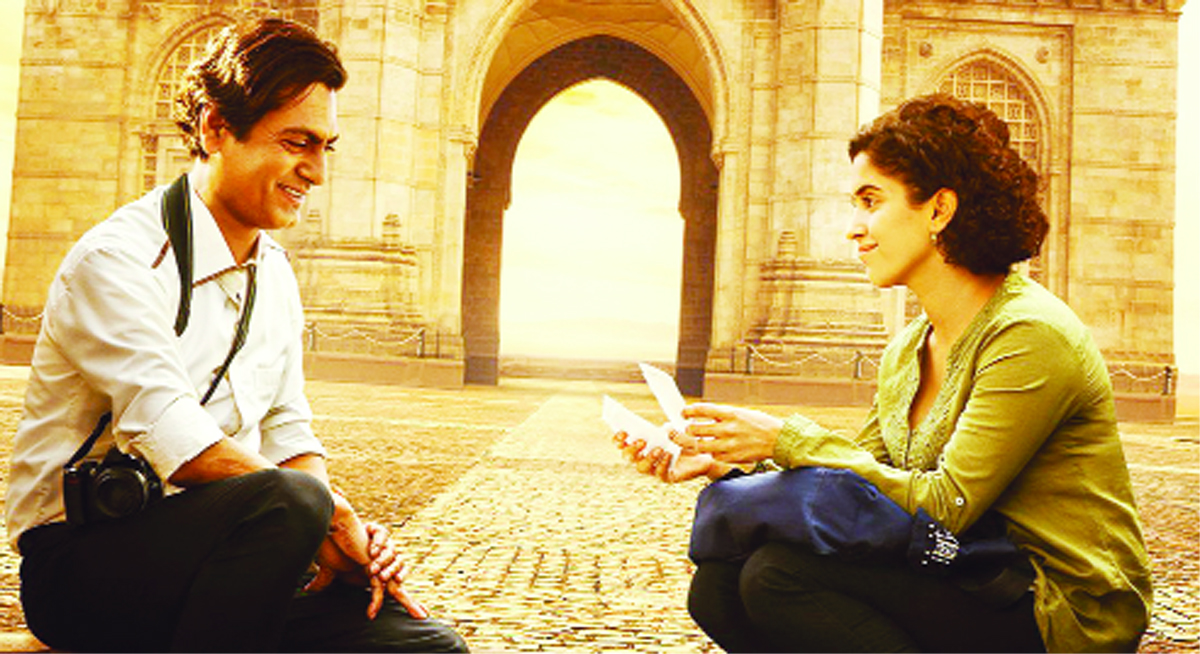 PHOTOGRAPH is the story of two people belonging to different strata of society who come together thanks to an unusual circumstance. Rafiq (Nawazuddin Siddiqui) is a photographer at the Gateway of India, Mumbai. He stays in a slum in a small room shared by 3 other people. Rafiq’s grandmother (Farrukh Jaffar), based in his village in Uttar Pradesh, is old and is distressed by Rafiq’s refusal to get married. She hence stops taking her medicine as a sign of protest. To pacify his grandmother, Rafiq lies to her that he is in a relationship with a girl named Noorie. He even sends her a picture of a girl he claims is Noorie. The picture however is that of Miloni (Sanya Malhotra), a scholar from a Gujarati family. Rafiq had clicked her picture when she got separated from her family when they were at the Gateway Of India. When she saw her family is searching for her, a scared Miloni left taking the photograph and without paying Rafiq for it. Rafiq however is impressed by her innocence and beauty. Miloni meanwhile is extremely happy with the picture that he clicked as she believes that it captured her happiness and contentment like never before. Meanwhile, Rafiq’s grandmother is so happy with the news of Rafiq’s relationship with Noorie that she comes to Mumbai to meet her. With no other option in hand, Rafiq meets Miloni and persuades her to meet his grandmother once. Miloni agrees and what happens next forms the rest of the film.
Ritesh Batra’s story is interesting and a bit in THE LUNCHBOX zone. Ritesh Batra’s screenplay is engaging at places but falls flat in several scenes. The element of consistency is missing. Ritesh Batra’s dialogues are simple and realistic.
Ritesh Batra’s direction is average. With a bit of a shaky screenplay, ideally his direction should have compensated. But that doesn’t happen. A few sequences don’t add much to the film and this happens more in the second half. Also the film has some unconvincing moments which the execution is not able to hide well. For instance, the manner in which Miloni is okay with Rafiq stalking her with the former even agreeing to meet the latter’s grandmother is difficult to digest. Also, how is she able to find time to meet Rafiq and his grandmother? Is she bunking her classes? If yes, why doesn’t the professor (Jim Sarbh) inform her parents or ask her considering that she is the star pupil? If she is not skipping classes, why don’t her parents get the hint that she is coming home late, especially considering how strict they are about her education?
PHOTOGRAPH begins on a sombre note and viewers will take a while to get into the mood of the film and characters. It’s only 20-30 minutes later that the film picks up. A few sequences stand out like Miloni meeting the grandmother for the first time and Miloni asking her maid Rampyaari (Geetanjali Kulkarni) about life in her village. The second half however is too dragging. Scenes of Rafiq buying the soap and comb and thereafter don’t work. PHOTOGRAPH is a 110 minutes long fare and ideally it shouldn’t have been more than 90 minutes. The entire sequence of Rafiq hunting down the cola manufacturer is quite unique. But nothing much happens with regards to it later. In fact the climax is quite ambiguous and as a result it’s a huge downer. The film just ends all of a sudden and even as an open ending, it’s unconvincing.
Nawazuddin Siddiqui as always delivers a commendable performance. He is apt as the soft spoken and good natured photographer. Sanya Malhotra however steals the thunder and gives a powerful performance, proving that she is one of the best talents around. She went completely into the skin of her character and looks apt for the part. Farrukh Jafar is likeable. Geetanjali Kulkarni is adorable and her scene with Sanya in the first half is a highlight. Sachin Khedekar (Miloni’s father) is passable with most of his dialogues being in Gujarati sans subtitles. Akash Sinha (photographer Baanke) and Saharsh Kumar Shukla are fine and authentic. Jim Sarbh (Professor Anmol) has an interesting look and is okay, performance wise. Vijay Raaz (Tiwari) doesn’t add much and his lone sequence is needless.
Peter Raeburn’s music has a laidback feel just like the film. Ben Kutchins and Timothy Gillis’ cinematography is raw and captures Mumbai very well. Neha Kamra’s hair and makeup and Niharika Bhasin’s costumes are straight out of life, especially in case of Sanya Malhotra. Shruti Gupte’s production design is also in sync with the character’s strata. John F Lyons’s editing is too dragging. Also the intercutting in few scenes seem amateur.
On the whole, PHOTOGRAPH is too niche and ambiguous and coupled with the lack of buzz it’s chances of success at the box office are slim.
(https://www.bollywoodhungama.com)