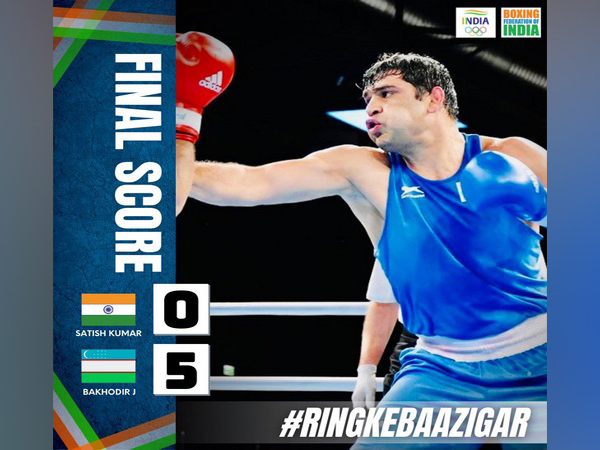 Tokyo [Japan], Aug 1: India boxer Satish Kumar bowed out of the Tokyo Olympics after losing against Uzbekistan’s Bakhodir Jalolov in the quarter-finals of the men’s super heavyweight (+91kg) category. Top seed Bakhodir Jalolov dominated the bout in all three rounds as he won by an anonymous 5-0 decision on Saturday here at the Kokugikan arena.
Jalolov with his quick feet and jab kept tagging Satish from the distance in the first round while the Indian boxer tried to get on a possible front foot but failed. The reigning World and Asian champion again showed his class in the second round and kept Satish at bay.
The southpaw boxer from Uzbekistan effortlessly took the third round too and marched into semis of the showpiece. But full marks to Satish for putting on a brave display despite his wound reopening and blood oozing out. He refused to quit and battled it out in what was a show of grit and determination.
Jalolov will now face either Great Britain’s Frazer Clarke or France’s Mourad Fraaliev in the final four.
Satish is the first Indian super heavyweight (+91kg) boxer to compete at the Olympics. Earlier on Thursday, Satish progressed into the quarter-finals after defeating Ricardo Brown of Jamaica in the Round of 16 by a split decision of 4-1.
Elsewhere on Saturday, Pooja Rani (75kg) got thrashed by China’s Li Qian in a 5-0 defeat. The Chinese boxer advanced to the semi-final of the showpiece event after defeating Pooja. (Agencies)