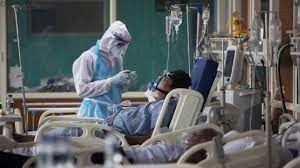 WASHINGTON, May 12: Describing the current COVID-19 crisis as the biggest India has ever faced, an eminent Indian-American philanthropist and venture capitalist from the Silicon Valley has urged the diaspora community to help support the Indian people.
India has been severely affected by the unprecedented second wave of the coronavirus and hospitals in several states are reeling under the shortage of health workers, vaccines, oxygen, drugs and beds.
“This is the biggest crisis India’s ever seen. So, what I urge them to do is two things: One is make sure you support your family and friends in India. But this is the one time that everybody should do more,” Indiaspora founder M R Rangaswami, an entrepreneur and philanthropist who lost his sister in Chennai due to COVID-19, told PTI.
Silicon Valley-based Rangaswami said that he has been working around the clock to galvanise as much funds and resources as the diaspora community from the US and other parts of the world can do for the people in India, which is experiencing the worst ever public health crisis post-independence.
“This is the one time that we should give more than what we can; more than what we think; more than what we want to do. This kind of crisis doesn’t come across every day,” Rangaswami said in response to a question.
Indiaspora, a network of eminent diaspora leaders, has raised over USD 2.5 million. Over the weekend, he was part of a “Help Tamil Nadu Breathe” campaign that raised USD 1.5 million.
In addition, Rangaswami has been involved in multiple campaigns to raise funds for India, which he says is crucial to save lives not only in India but also in the region and the world.
“The problem is if India doesn’t contain it, it’s going to hit Nepal, Bangladesh, Sri Lanka, many countries around India. This could cause a big human toll and economic toll.
“We don’t want to be solving this in three months in America,” he said, adding that the variant of COVID-19 in India is much more contagious and damaging to people.
Rangaswami said that the diaspora in the US has done very well in getting to the US administration to make them see how important this is not just for Indian-Americans but for the US and the world as well.
Members of the diaspora community are in close touch with different people in the administration, he said.
The community leaders are also in touch with the Indian side, he said as he appreciated the recent decisions of the Indian government to waive and reduce various taxes including import duty and GST.
“That was a big deal. Things like that are happening. Now the diaspora is also calling for maybe a waiver of the FCRA (Foreign Contribution (Regulations) Act) rules which prevents sub granting of money… so that we can have friction free flowing of money to the last mile,” he said.
Noting that the diaspora community is closely observing the developments in India, Rangaswami hoped that it would soon slow down.
“We don’t know when they will reach their peak. But we all in general, our prayers are with them, our thoughts are with them, our support is for India, and we will keep all that this goes away,” he added.
After recording over four lakh fresh cases for four consecutive days, India witnessed a single-day rise of 3,66,161 COVID-19 cases on Monday and 3,29,942 infections on Tuesday. (PTI)