E-Paper
Home International ‘There is no place for hate and racism’: Satya Nadella on George... 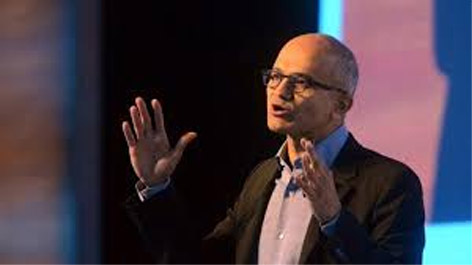 WASHINGTON, June 2: Microsoft’s India-born CEO Satya Nadella has said there is no place for “hate and racism” as he expressed solidarity with the African-American community in the wake of violent widespread protests sparked across the US by the custodial killing of George Floyd.
Floyd, a 46-year-old African-American man, was handcuffed and pinned to the ground in Minneapolis on May 25 by a white police officer who kneeled on his neck as he gasped for breath.
His death has triggered violent protests across the US, leading to the death of at least five persons, arrest of over 4,000 people and damage to property worth billions of dollars.
“There is no place for hate and racism in our society. Empathy and shared understanding are a start, but we must do more,” Nadella,52, said in a tweet on Monday.
“I stand with the Black and African American community and we are committed to building on this work in our company and in our communities,” said the Hyderabad-born Chief Executive Officer of Microsoft.
A day earlier, Google CEO Sunder Pichai also expressed solidarity with the African-American community.
“Today on US Google & YouTube homepages we share our support for racial equality in solidarity with the Black community and in memory of George Floyd, Breonna Taylor, Ahmaud Arbery & others who don’t have a voice,” Pichai wrote on Twitter on Sunday.
“For those feeling grief, anger, sadness & fear, you are not alone,” Pichai said, sharing a screenshot of the Google search home page which said: “we stand in support of racial equality, and all those who search for it.”
Nadella’s Microsoft also said they will be using the platform to amplify voices from the Black and African-American community at the company.
Violent protests have engulfed at least 140 cities across the US in the days following the death of Floyd.
Darek Chauvin, the white police officer who choked Floyd to death, has been fired, and on Friday was arrested and charged with third-degree murder and manslaughter.
Considered to be the worst ever civil unrest in the US in decades, the violent protests have engulfed at least 140 cities across America in the days following the death of Floyd.
Over 4,000 people have been arrested and curfews imposed in at least 40 cities. (PTI)