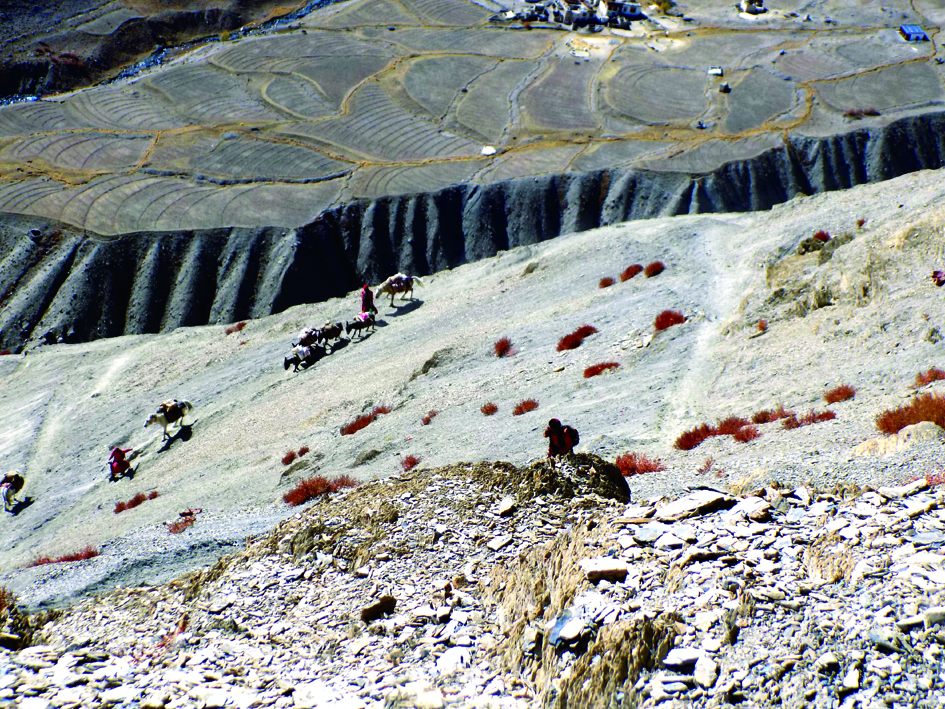 Tsering Dolkar
Ask any woman from a village in Lingshed region of Ladakh and she will tell you that the              distances to medical facilities and the poor road connections, is their biggest fear.  For a woman  to brought from Youlchung village to Khupa-La        (Khupa Pass), it takes around an hour and a half on foot to reach the PHC at Lingshed, a distance of 17 km.  From villages further down from Khupa La, such as Skumpata and Gongma, it could take slightly less.
Deachen Dolma, 39 years old living in Ma-chu area,Photogsarvillage,Lingshed is a mother of three. With a shadow of sadness flitting across her otherwise cheerful face, she shares how she lost her fourth child two years ago. In her sixth month of pregnancy, she was diagnosed with a condition called ‘oligohydramnios’ or low amniotic fluid and also contracted jaundice. “I had to be taken to Leh on animal. The route was via Sumdo and takes around four hours from Ma-chu”.  Deachen recalls, “We used to walk using animals such as horse or donkey till Fanjila, a distance of 36 km, reach the highway .  The staff from the sub centre would also reach this point with essential medicines that would be brought from the  District Hospital at Leh. We had a system called be-gar in which two or three families, mainly male members from a village would take turns to make this journey.
While sub centres offer delivery facilities, not many women are aware of this. Those who are aware are not convinced that the sub-centres would be able to cope in emergencies. More and more people are opting to take pregnant women to the PHC at Khaltsi at a distance of 56 km or else to the SonamNurboo Memorial Hospital, the District Hospital in Leh city. Even for antenatal and post-natal checkups, most women prefer to visit the PHC at Lingshed, although these are available at the sub centres.
The biggest difficulty is during winter when roads are closed. During an emergency, people first contact the Block Medical Officer (BMO) who informs the Chief Medical Officer (CMO). The CMO takes it forward to the Deputy Commissioner of the district who then formally conveys to the Air Force that a helicopter is required for ferrying the sick to District Hospital, Leh.”  This system too has loopholes. The helicopter cannot fly in cloudy weather. According to SherabDolkerSkumpata village, “Due to these hardships, we prefer taking the pregnant woman to Leh and staying there before the road gets closed during winter. ”
Health facilities in the region speak of a sore neglect and lack of accountability.   Disket Dolma, BMO
Khaltsisays “In the summer of 2015, we visited some villages and found the delivery rooms in a pathetic condition. No doctor had ever visited the place.  How can one expect the medical staff to provide the necessary services in the absence of a doctor?” The distances, the remoteness and the lack of good roads, of transport, compounds the problem.
The Department of Health and Family Welfare, Ladakh Autonomous Hill Development Council provides a two-week training course at the block level and district level. However frontline health functionaries, such as ASHA and ANM  are not able to derive full benefit from this.  According to ThinlasChorol, the village ASHA at Photogsar village,” Letters sent to us by the Department do not reach us on time.  There is no bus service to the village; private taxis do not ply either. Even communication through Digital Satellite Phone Terminals (DSPT) is erratic because of network problem.” Says Diskit Dolma, “There is a provision for two Auxiliary Nurse Midwives (ANM) for each sub-centre. One is provided by the Department and the second is supposed to represent National Health Mission (NHM).  Sadly most sub centres have only one ANM, provided by the Department.  The sub-centre at Neraks, was being run for two years by the pharmacist and the nursing orderly, posted there.  Dr. Yangchan Dolma, CMO Leh district rues,” 50 doctors post are lying vacant in Leh district including Kozok and Lingshed.”
There is a lack of interest, of commitment to serve in remote areas amongst the medical staff, posted in health facilities.  They are always on the look-out for an opportunity to be transferred to Leh city.  According to Dr. Tsering Norphel, Deputy CMO, Leh district infant mortality rates and maternal mortality rates are higher in remote areas. SonamDorje, Councillor of Lingshed region says that since the region remains cut off during winter, facilities should be geared up to meet the requirements of the community. The Councillor says, “Not having road is the biggest challenge. We have pucca road only till Wanla village. After the Public Works Department handed over the task of road-construction in 2011 to General Reserve Engineer Force, a 10 kmpucca road was constructed but got washed away in recent floods. A pucca road to Lingshed is a distant dream.”
Says SonamDorje, “We took up this issue with CMO, BMO, Executive Councillor, Health and other concerned ministers of the state and centre.We said that it was imperative that the PHC at Lingshedis provided with one doctor atleast for six months during the summer. Unfortunately, there are no doctors available from our region.  We try and encourage students of medicine from Ladakh, studying in the region, in Srinagar, Jammu and Chandigrh — to return home and take up these posts.
While it is essential to streamline medical facilities in the region, the paramount issue remains that of road connectivity. The physical link between people and health services is crucial in the highlands of Ladakh especially for the community living in remote areas. A starting point, and one that would be welcomed by all would be  goodroads inLinghsed. (Charkha Features)